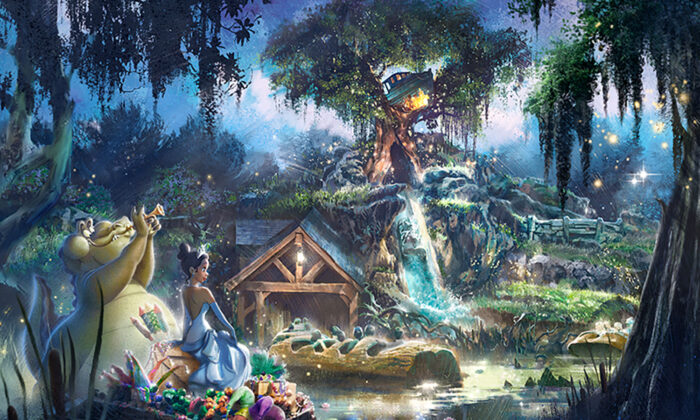 Walt Disney Co announced on Thursday it is reimagining its beloved classic ride Splash Mountain into a The Princess and the Frog themed attraction at both Disneyland park in California and Magic Kingdom park in Florida.

The Princess and the Frog is a 2009 Disney film and stars an African American woman, Princess Tiana.

“We pick up this story after the final kiss, and join Princess Tiana and Louis on a musical adventure—featuring some of the powerful music from the film—as they prepare for their first-ever Mardi Gras performance,” Disney wrote in a news release.

The announcement follows criticism from the current theme for Splash Mountain, which is based on the 1946 film “Song of the South.” The attraction first opened as a log-flume ride at Disneyland in the late 1980s.

The films’ story is based around a young boy named Johnny during the reconstruction era. Johnny visits his grandmother’s plantation for an extended time and later befriends one of the plantation laborers, an older black man named Uncle Remus.

The boy takes joy in listening to Remus his tales about his adventures about talking animals and he also learns from him how to overcome the struggles he is having at the plantation.

A recent online petition argued that the movie promotes racist stereotypes in its portrayal of freed slaves, as well as its ahistorical conception of the plantation system.

Hollywood companies including Disney are revisiting works from the past in light of renewed calls for racial justice following the death of African American George Floyd in police custody.

The petition on Change.org said Splash Mountain was a “beloved classic” at California’s Disneyland, Walt Disney World in Florida and Tokyo Disneyland.

“Disney parks should be a home for all to enjoy regardless of race, age, whatever your background may be,” the petition stated. “While the ride is considered a beloved classic, it’s history and storyline are steeped in extremely problematic and stereotypical racist tropes from the 1946 film Song of the South.”

A counter-petition for Splash Mountain had its supporters as well. Another petition was launched that asked for the ride to remain in its current incarnation.

“Many adults and children ride this attraction because it brings back childhood memories,” the “Keep Splash Mountain” petition said. “Disney already took out the racist songs which was a good move on their part.”

“As part of the creative development process, conceptual design work is well underway and Imagineers will soon be able to conduct preliminary reviews and develop a timeline for when the transformation can start to take shape,” the release stated.