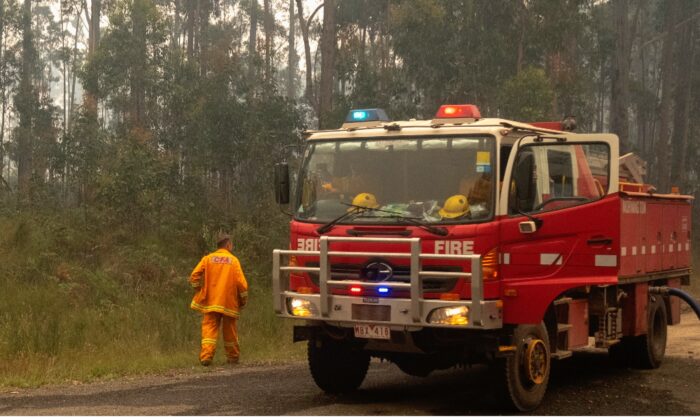 Heavy downpours and thunderstorms drenched Australia’s bushfire-ravaged east coast on Friday, bringing temporary relief to firefighters battling some of the worst blazes the region has seen in decades.

Intense rain swept across Victoria, New South Wales (NSW), and Queensland—the states worst affected by the bushfires that have killed 29 people, millions of animals, and destroyed more than 2,500 homes since September.

Fire services have said the change in weather will not extinguish all the blazes, but will aid greatly containment. For the first time since December, the number of blazes in NSW have diminished to double digits, with 85 fires burning in the state as of Friday, reported The Australian.

Rain has fallen across most firegrounds over the last 24 hours which is great news! Our fingers are crossed that this continues over the coming days.

This morning 82 fires are still burning across New South Wales, with over 30 still yet to be contained.#NSWRFS #NSWFires pic.twitter.com/Zn6Id3TX85

“In parts of northern NSW, the rain was enough to put out the smaller fires that have been burning for months (and) that’s a major win for the Rural Fire Service,” NSW RFS spokeswoman Angela Burford told the news outlet.

The NSW fire services said on Twitter Friday it hopes the rain and thunderstorms continue over the next few days, as forecast by the Bureau of Meteorology in the state which has been drought-stricken for three years.

As of Friday morning, 17 fires were still burning in Victoria, according to the Country Fire Authority which said the wet weather has had “minimal impact in suppressing fire activity” across the state’s east and northeast regions, the Guardian reported.

Despite the hope the wet weather has brought fire fighters and farmers, meteorologists have warned that the sudden change in weather could cause flash flooding and falling trees, while lightning could lead to new fires being ignited.

By Friday afternoon, evacuation warnings were issued for residents near Mount Buffalo, as strong winds were forecast to cause a spike in fire activity.

“We’re expecting unsettled weather for the next four or five days,” Jake Phillips from the Bureau of Meteorology told The Australian.

Phillips added that the rain should slow down the rate at which the bushfires spread, even though it may not extinguish them.

Over Thursday and Friday, NSW saw up to 4 inches of rainfall, while 4.4 inches and 5 inches of rain fell in Buladelah and Boonanghi, respectively, during the same period, the Guardian reported.

Relief is here for a number of firefighters working across NSW. Although this rain won’t extinguish all fires, it will certainly go a long way towards containment. This footage was captured down at the Good Good Fire burning near Cooma. #nswrfs #nswfires pic.twitter.com/fxV9u2hN6K

The heavy downpours have helped to clean smoky air in Australia, but Sydney, Canberra, and Melbourne remained on Friday in the world’s top 100 polluted cities, according to AirVisual’s pollution ranking for major global cities.

Morrison held bushfire roundtables in Canberra on Thursday and Friday to outline the next stage of federal government’s response for those affected, including small business and tourist operators.

“We will be moving on to the next phase soon, which is all about the locally led recovery and the response plans that will be developed on the ground and we will work with you and them in those places,” he said on Thursday.

“The National Bushfire Recovery Agency and Andrew Colvin who leads it is here with me today, has been stood up over the last week and a half and has committed funds of $2 billion dollars over the next two years,” Morrison said on Friday, adding that these are “very challenging times.”

“I can tell you already, $300 million of that $500 million that was committed for this financial year has already been committed.”

He said at a press conference earlier this month that the government would pay “whatever it costs” to recover from the fires. If further funding was needed, it would be provided, Morrison said.