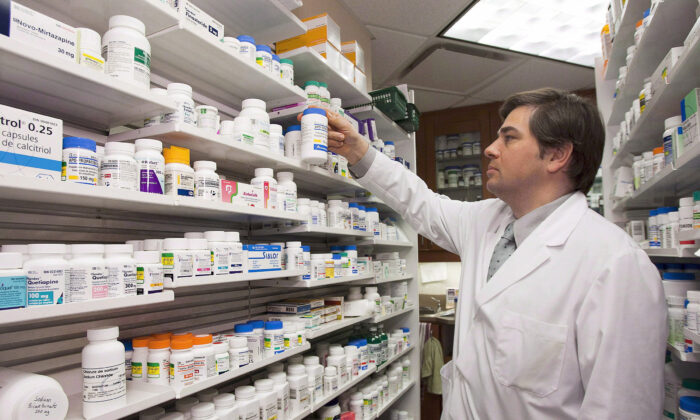 Pharmacist Denis Boissinot checks a bottle on a shelf at his pharmacy in Quebec City in this file photo. (The Canadian Press/Jacques Boissinot)
Updated: 2020-05-13 18:45:03

With most of the COVID-19 procurement attention focused on personal protective equipment (PPE), authorities and the pharmaceutical industry are closely monitoring another growing shortage—vital medicines.

In particular, less expensive generic drugs have vulnerable supply chains. And considering that China dominates the global production of their active pharmaceutical ingredients, the risk is amplified.

As demand for treatment rises, drug shortages are picking up.

The Canadian Pharmacists Association (CPhA) said on April 17 that the number of drug shortages being reported to the government’s mandatory reporting website “has increased dramatically in the last few weeks.”

“There are mechanisms through which they [Health Canada and the provinces and territories] are monitoring this very closely,” Chief Public Health Officer Dr. Theresa Tam, said on May 12 during her daily press conference. “And I think they are looking at different strategies.”

The industry in Canada is preparing itself for absorbing greater stress.

Sandoz Canada, a division of pharmaceutical giant Novartis, said it has accounted for increased demand for all of its manufactured products.

“The vast majority of Sandoz products are manufactured using active pharmaceutical ingredients (API) and components from countries outside of China,” said Stephanie Weinstein, internal communications and corporate affairs manager at Novartis Canada, in an email to The Epoch Times. “At this time, we do not anticipate any disruption to our overall supply chain.”

Apotex, Canada’s largest generic drugs manufacturer and the country’s only maker of hydroxychloroquine, recently donated 2 million dosages to the government. The drug, used to treat COVID-19, was listed by Health Canada as one of three with a severe shortage, according to the CPhA on April 17.

In addition, experts emphasize logistical adjustments and greater global cooperation to ensure vital medicines are safely available for all countries.

“Generic and biosimilar medicines and medicines manufacturing inputs must be allocated priority air and ocean freight space at predictable and reasonable rates in order to avoid disruptions in supply,” said Jim Keon, president of the Canadian Generic Pharmaceutical Association (CGPA), in an April 1 statement.

The efforts being made by the pharmaceutical industry and policy-makers to prevent widespread shortages would also help minimize the impact of any potentially nefarious actions by the CCP.

Rosemary Gibson, a senior advisor at the Hastings Center bioethics research institute in New York and author of “China Rx: Exposing the Risks of America’s Dependence on China for Medicine,” has pondered what would happen in a pandemic if Beijing decided to keep medications for itself or even turned off the tap as a negotiating tool.

Totalitarian regimes like the CCP aim to destabilize democracies in a variety of ways. Propaganda is one tool. Controlling the world’s supply of medicines could be another, Gibson said.

China’s position of dominance in active pharmaceutical ingredients is a result of the CCP’s tried-and-tested strategy of using state subsidies to help flood the market with products so that prices fall and the competition is driven out of business. China skirts the environmental regulations needed to ensure the safe production of chemicals, which effectively gives it another cost advantage over North American production.

“This is the playbook it [China] uses, and they don’t operate in a free market system. What they did was a violation of international trade law and antitrust rules,” Gibson told The Epoch Times.

China can then establish a quasi-monopoly and potentially impose its will on other countries.

It’s not unlike the situation with the aforementioned rare earths, where the United States is trying to wrest control from China. The generic drug industry in the United States has been decimated by cheaper production in Asia.

Gibson has long been saying that China aims to be the world’s pharmacy and that it controls about 70 percent of the core chemicals and raw materials needed for the generic drug industry.

In 2018, generic drugs were dispensed to fill 72 percent of retail prescriptions in Canada—just over 500 million prescriptions, according to the CGPA.

According to La Presse, opinions differ on how dependent Canada is on China, as Health Canada didn’t specify when queried in November 2019. But experts La Presse spoke to said it could range from 60 percent to 80 percent.

“Given India’s manufacturing capacity, our shared ideals of democracy and freedom, and mutual belief in a liberal rules-based order, this would demonstrate commitment to each other,” Sappani wrote in an editorial for the Macdonald-Laurier Institute.

India is already a major manufacturer of generics, but it relies on China for the active ingredients.

The CCP Virus Pandemic Shows Why It’s Dangerous to Rely on China for Medicines: Rosemary Gibson

The quality and integrity of Chinese manufacturing has been questioned repeatedly in recent years, and now production of PPE has been found to be defective by several countries including Canada. Gibson asks what might be the case with medicines Canada is getting from China.

According to a report from NTD, between 2007 and 2018, at least 13 major Chinese manufacturers were found to be producing defective vaccines.

China’s pharmaceutical industry lacks accountability, since all the major players are state-owned or owned by people with close ties to high-ranking CCP officials.

Vaccine scandals are relatively commonplace in China, but the authorities are quick to take action to silence the reprisals. Parents demanding answers for children sickened or killed by defective drugs have been threatened. Journalists and whistleblowers have been punished.

La Presse reported that Health Canada rarely inspects Chinese factories—just 3 out of 45 inspections during fiscal year 2018–19 were done in China. They all passed.

But a fall 2019 investigation by STAT, a media company specializing in life sciences, found that Chinese factories were more often guilty of U.S. FDA violations than ones in Europe, India, or the United States. Chinese companies also falsified information more frequently.