E-Cigarettes Are Bad for You—But Smoking Is Worse 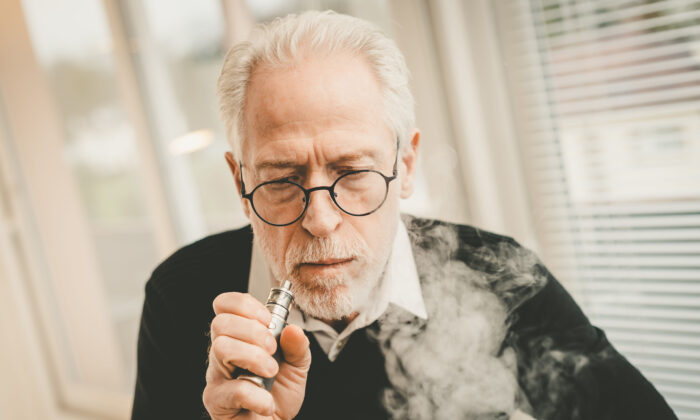 Health authorities in the United States are investigating 530 cases of lung illness, including seven deaths, reportedly connected to vaping. Some of these patients have been diagnosed with lung inflammation caused by inhaling oil.

The U.S. Food and Drug Administration (FDA) has advised many samples tested have contained tetrahydrocannabinol (THC), the psychoactive ingredient in cannabis, as well as significant amounts of vitamin E.

No cases of vaping-related lung disease have been reported in Australia to date. But we know a small proportion of people in Australia do vape (about 1.2 percent of the population), and may, therefore, be worried about developing this serious lung disease.

Of people who vape, it’s those relying on the practice to avoid smoking cigarettes who may find the current headlines most comforting.

Vaping as an Alternative to Smoking Cigarettes

Many experts regard the delivery of nicotine through vaping to be less risky than smoking traditional cigarettes because it avoids most of the harmful combustion products inhaled through cigarette smoke.

Whether vaping works to help people quit smoking continues to be debated, although some clinical trials show it is more effective than other quit aids such as nicotine patches. We know some people who vape are doing so because they use the practice to quit smoking cigarettes.

The widespread reports of an outbreak of a sudden-onset and serious lung disease associated with vaping may leave this group wondering if they would be better off ditching vaping and returning to smoking.

The simple answer is, no, they wouldn’t. Research shows vaping poses less of a danger to our health than smoking traditional cigarettes. But that doesn’t mean it’s without risk.

The Chemicals in the Vapor

Most commercially produced vaping liquids contain water-soluble liquid (propylene glycol, glycerol), nicotine (though not in Australia), and flavorings. The liquid is heated by the vaping device to produce a mist that’s inhaled into the lungs.

Other substances can also be used in vaping devices. Vaping cannabis extracts and concentrates such as THC oil (known as “dabbing”) has increased in recent years, particularly in the United States, where 11 states have legalized recreational cannabis use and more than 30 have legalized medical cannabis.

Cannabis vaping liquids are often oil-based, unlike most nicotine vaping liquids. Many come from the black market and may be contaminated with pesticides, fungi, and heavy metals. There may also be serious risks posed by added ingredients, such as vitamin E oil, a focus of the current U.S. investigation. This additive is used to dilute and then thicken the liquid to hide the dilution.

The risks from inhaling these vaporized cannabis liquids are not fully known, but likely differ from vaping water-soluble liquids.

But based on evidence of a strong association between the cases of illness and vaping illicit cannabis liquids, the FDA recommends consumers “avoid buying vaping products on the street, and to refrain from using THC oil or modifying/adding any substances to products purchased in stores.”

There have been calls in Australia to ban all vaping products in response to the U.S. outbreak. But because most of the outbreak cases have admitted to vaping illegal THC oil liquids, this would be unlikely to prevent similar cases from occurring here.

No recall of commercial nicotine vaping products has been issued in the United States, suggesting the regulator doesn’t currently suspect those products are responsible for the outbreak.

This Isn’t the First Time Vaping Has Raised Health Concerns

In 2009, the FDA tested 18 e-cigarette cartridges and found diethylene glycol, an ingredient in anti-freeze, at 1 percent in one cartridge. However, subsequent studies have either not detected this contaminant, or found it at the trace levels allowed in medicines.

There were also fears vapers could develop bronchiolitis obliterans, a serious and irreversible lung disease, because research found diacetyl, a flavoring added to give a buttery taste, in some vaping liquids.

This disease was nicknamed “popcorn lung” after microwave popcorn factory workers, who were exposed to airborne diacetyl, developed the condition. The urban myth that vaping causes popcorn lung persists, despite no cases being reported from vaping.

Cigarette smokers are actually exposed to more diacetyl from tobacco than are vapers from vaping diacetyl-containing liquid. Nevertheless, the United Kingdom banned diacetyl as an ingredient in vaping liquids in 2016 as a precaution.

Other potentially harmful chemicals have been found in the vapor from commercially produced nicotine vaping products. These include metals, acrolein, and formaldehyde. But again, these chemicals are found in much higher levels in cigarette smoke, along with more than 5,000 other chemicals, including many carcinogens.

One study that compared the harmful chemicals in nicotine vapor and cigarette smoke estimated the lifetime cancer risk from smoking was 250 times that from vaping.

So, What’s the Take Home Message?

Vaping shouldn’t be seen as a harmless practice. Cell and animal studies indicate vaping may adversely affect lung tissue, although it’s uncertain how these effects translate into disease risk in humans. Across the board, we still have a lot to learn about the health effects of vaping long term.

People who don’t smoke tobacco shouldn’t begin vaping. However, for someone who smokes tobacco, the choice is more complicated because of the very high risks of smoking. Ideally, the safest option is not to smoke or vape, but the priority for smokers should be to stop smoking.

Professional support from Quitline (where available) and medicinal nicotine products or prescription medicines can help. But those who have tried and failed to quit, and have switched instead to vaping, shouldn’t return to smoking on the basis of these cases in the United States.

To reduce risks to their health, people who vape should avoid any liquids that contain oils, and especially avoid cannabis/THC liquids. Only purchase vaping products from reputable manufacturers, such as those that comply with European regulatory standards. Working toward stopping vaping is also recommended if this can be done without relapsing to smoking.

Coral Gartner is an associate professor at the school of public health at The University of Queensland in Australia. This article was first published on The Conversation.