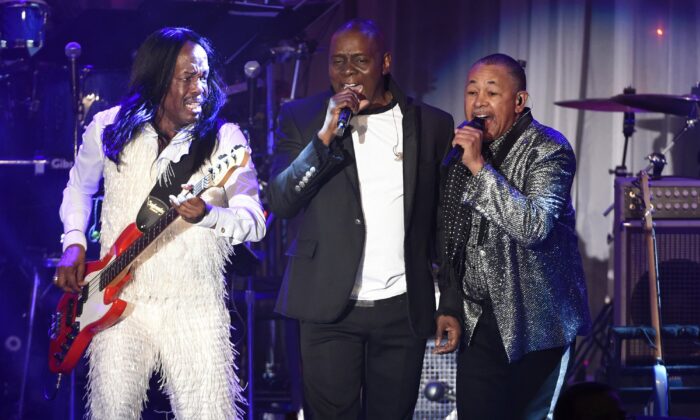 Disco-funk band Earth, Wind & Fire made history on Dec. 8 as the first African American Group to be inducted into Kennedy Center Honors, which recognizes lifetime achievement in the arts.

The group were announced as recipients of the Kennedy Center Honors over the weekend at its 42nd event, which took place at Washington, D.C.’s John F. Kennedy Center for the Performing Arts.

Earth, Wind & Fire’s original members Verdine White, Philip Bailey, and Ralph Johnson, paid tribute to the group’s late founder and co-lead singer Maurice White, who passed away in February 2016 at his home in Los Angeles, California, due to complications from Parkinson’s disease.

“You can’t play any Earth, Wind & Fire songs without Maurice’s DNA being on it, so he’s always here and we’re always celebrating him and his vision,” Johnson, 68, told Billboard. “People are still coming together and having fun.”

Hinting toward a possible duets album in the future, Bailey said: “We’re making a list, and checking it twice. And you’ll hear about it soon.”

“There are so many more African American acts that are deserving and perhaps this can be the first of many more to come,” he added.

Congratulations to Earth, Wind and Fire!

The ground-breaking disco/ funk/ rhythm and blues band is the first African-American musical group to be inducted into the Kennedy Center Honors.

Sunday’s event featured a genuinely unique event for the Kennedy Center as Big Bird walked the red carpet along with fellow “Sesame Street” characters Bert and Ernie, Abby, and Cookie Monster, accompanied by their respective humans.

“I’m heartbroken that this happened on this particular day,” said Sonia Manzano, who played Maria for decades on “Sesame Street.” “But I’m glad we’re all together.”

The night ended with a packed stage performing “September” with the entire audience on their feet and actor Tom Hanks leaping from his seat, arms waving, to lead his whole section in dancing.

The event will be broadcast on CBS on Dec. 15.