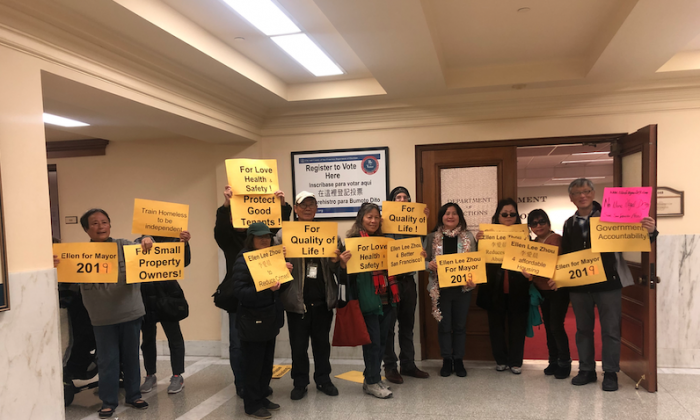 With the odds stacked sky-high against her, Ellen Lee Zhou continues to campaign for the mayoral office of San Francisco.

The Epoch Times interviewed Zhou about herself, her campaign, and what’s going on in one of the country’s most populous cities. The election will be held on Nov. 5, 2019, and Zhou hopes it will be won by a Republican candidate, something that hasn’t happened in 45 years.

“It’s really not about Republican or Democrat,” she said. “It’s about ending the corruption that has been plaguing this city.”

She talked about the corruption in San Francisco and elaborated on what the city government officials have been up to.

According to Zhou, who has worked as a social worker for the government for decades, the city of San Francisco allocates $3,900 to $17,000 per homeless person per month, with the higher amounts going to those with mental or other health problems. According to city surveys, the vast majority of homeless people don’t see any of this money.

The assumption is that it goes into the pockets of the officials representing what is referred to as “the one party” (Democrats) in San Francisco. This was one example that Zhou mentioned.

Another pattern of corruption she spoke of was the Democratic Party prohibiting her from entering political debates and forums during her 2018 mayoral campaign.

San Francisco had a special mayoral election in 2018 to elect a mayor to serve the remaining term left by the former mayor Ed Lee. Ed Lee died in Dec. 2017 in his office, and his term was incomplete until January 2020.

“I counted; there were over 20 debates or forums that they would not let me attend. I asked why, and they said, ‘Because you’re not a Democrat.’ The cops were even called on me at one debate, blocking me from entering,” she said.

Zhou also said the city officials who are connected with cannabis stores will coach the store owners and workers on how to dodge federal enforcement. She mentioned City Hall “gangs” whom she witnessed receiving donations from cannabis operators.

Zhou said that the current mayor, London Breed, received the most campaign donations from them.

In this way, their donors can spend funds to influence elections, with voters being unaware of where the money came from.

Zhou stated: “In 2018, San Francisco taxpayers paid $4.16 million to all Democrats to run for public office.”

She cited voting fraud, as a lot (about 20 percent) of voters in the city do not exist; they have either moved or died. In this way, the corrupt groups who count the votes can ensure a Democratic victory.

Other major issues facing San Francisco are homelessness and lack of affordable housing. According to Zhou, there are between 50,000 and 75,000 empty apartments in the city.

Mayor Breed has gotten housing propositions passed for a total of $561 million.

However, Zhou said: “I personally understand that those propositions will not address the problems that we’re facing. For a city with $12.3 billion, we have enough money. … Those funds are exactly what those politicians need for their political agenda.”

“When I become mayor, I will create housing programs that immediately release the apartments so teachers and workers can have housing,” Zhou said.

She spoke about her plans to work with city officials to crack down on drug dealers and create treatment programs to help the 25,000 drug users in the city get back to normal.

“We have 15 percent of homeless people who are working. Those people are my priority,” she stated.

She also said that a lot of small businesses in the city are closed because of failing policies that put unnecessary taxes on small businesses but don’t tax higher-grossing conglomerates and corporations.

“It is very hard for mom-and-pop shops to survive in San Francisco,” Zhou said. “We will talk with them and ask how we can lower their taxes. … The government is not giving to the smaller companies.”

Zhou wants to work directly with the small businesses to see how unfair expenses like high rent and miscellaneous, money-grubbing taxes can be relinquished. She also said that a lot of Asian and other communities that used to be safe and clean are experiencing muggings, assaults, and rape of older and more vulnerable individuals.

When asked about her National Rifle Association (NRA) membership and why she supports the association, Zhou said: “I’m a member because I believe in the Second Amendment. I’m a gun owner; I believe it’s important to have self-protection. … Think about it; if there was a riot in San Francisco for whatever reason, I could use my gun to protect myself. … The Second Amendment was made for people to have guns to protect the country.”

Zhou referred to herself as a “very tiny David versus a giant Goliath” regarding her chances against the Democratic “one party” in the upcoming mayoral election.

However, she has strong faith and morals as a foundation, and she believes that she can win if she gains enough votes from people in Asian communities and other individuals who think it’s past time for a change in San Francisco.

Go Back: US News
Previous: Beto O’Rourke: Trump has “no place” in El Paso, Mayor disagrees
Next: Ohio Republican Leader Calls on Lawmaker to Resign Over Comments About Dayton Mass Shooting
source : www.theepochtimes.com
''