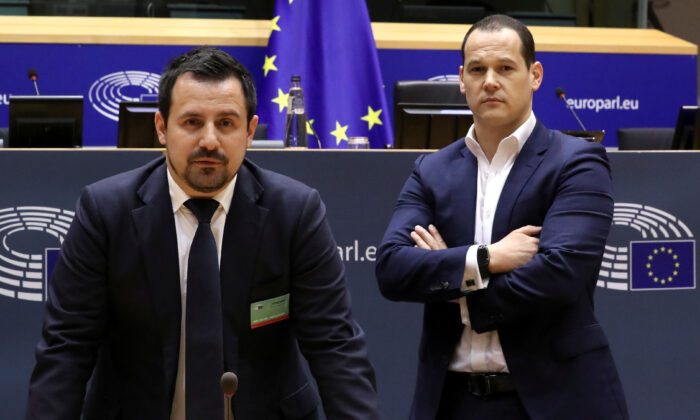 Frenchman Vincent Fichot and Italian Tommaso Perina, who both became estranged from their children after their Japanese wives took them without consent, pose for Reuters after presenting a petition to the European Parliament to demand action against cases of so-called parental child abduction affecting Europeans living in Japan, in Brussels, Belgium, on Feb. 19, 2020. (Yves Herman/ Reuters)
Updated: 2020-07-09 18:10:07

BRUSSELS/TOKYO—The European Parliament urged Japan to comply with international rules on child protection and to allow for joint parental custody, after a number of EU citizens were denied access to their children by Japanese mothers.

Unlike most countries, Japan does not recognise joint custody after divorce and children often lose contact with the non-custodial parent.

In a non-binding resolution approved late on Wednesday, EU lawmakers expressed concern over “children in Japan being abducted by (one) parent” and urged Tokyo to enforce domestic and foreign court decisions on the return of the child and on access and visiting rights.

The EU Parliament has been lobbied by EU citizens such as Frenchman Vincent Fichot and Italian Tommaso Perina, who live in Japan and are being denied access to their children.

“It is time for Japan to demonstrate integrity and good faith in the best interests of the children. It is time for all kidnapped children to come home,” the two fathers said in a joint statement to Reuters.

Emboldened by the growing number of foreign victims-turned-activists, more Japanese parents who have suffered similarly from the lack of joint custody have begun to speak up, lobby for change and sue the government.

French President Emmanuel Macron and Italian Prime Giuseppe Conte have raised their concern on the issue with Prime Minister Shinzo Abe. Some Japanese and foreign parents have collectively launched a complaint to the United Nations’ human rights body.

Responding to the European Parliament’s resolution on Thursday, Japan’s foreign ministry denied that the country was not compliant with international agreements on child abductions, and said it would continue to explain its actions to EU nations.

It said Japan should “learn from other countries’ systems” to explore a possible alternative to its single-custody system after divorce.

By Marine Strauss and Chang-Ran Kim