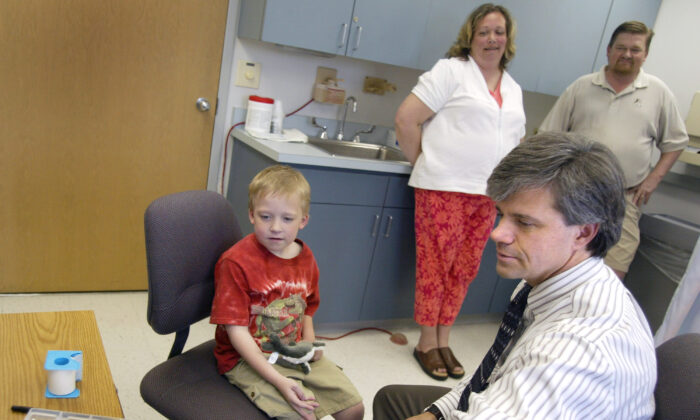 Seven-year-old Gregory White, who suffers from cystic fibrosis, sits in a chair with a doctor at the Loyola Oakbrook Medical Center in Illinois, in a file photo. (Tim Boyle/Getty Images)

The U.S. Food and Drug Administration (FDA) announced this week it had approved Vertex Pharmaceuticals’ three-drug combination which would treat 90 percent of patients with cystic fibrosis.

The approval of the drug, marketed as Trikafta, comes five months ahead of the agency’s previously announced action date, and greatly expands the percentage of cystic fibrosis patients that Vertex can treat.

With a list price $311,000 per year, the treatment is approved for patients aged 12 and above who have a genetic mutation—called an F508del mutation—which affects 90 percent of cystic fibrosis patients or roughly 27,000 people in the United States, the agency said.

In a statement, the FDA’s acting Commissioner Ned Sharpless said it is a “landmark” approval, and a testament to its efforts in “looking for ways to help speed the development of new therapies for complex diseases, while maintaining our high standards of review.”

Through FDA approval today, we are making a landmark treatment available to 90% of cystic fibrosis patients 12 & older – some who previously had no options – and giving others in the community access to an additional effective therapy. https://t.co/bFMml425Hn pic.twitter.com/Rcdipx4WxL

The FDA’s approval makes “a novel treatment available to most cystic fibrosis patients, including adolescents, who previously had no options and giving others in the cystic fibrosis community access to an additional effective therapy,” Sharpless added.

Cystic fibrosis is a life-threatening progressive and genetic disease that causes the formation and buildup of thick mucus in the lungs, digestive tract, and other parts of the body. The condition is caused by mutations in the CFTR gene, and can lead to severe respiratory and digestive problems as well as other complications such as infections and diabetes.

Today, the U.S. FDA approved the triple-combination modulator elexacaftor/ivacaftor/tezacaftor (Trikafta™) for people with #cysticfibrosis 12 years and older who have at least one F508del mutation. https://t.co/pj5ZEB54sT

More than 70,000 people worldwide are living with the condition, with more than half aged 18 or older. The median life expectancy of those with cystic fibrosis is around 47 years, according to Cystic Fibrosis News Today.

The newly approved treatment works by targeting the faulty CFTR protein, making it function more effectively, according to the FDA.

The backbone drugs in Trikafta are ivacaftor and tezacaftor, which make up Vertex’s previously approved CF drug Symdeko. Ivacaftor is also sold as a standalone treatment, Kalydeco, and is part of another double combination CF product called Orkambi.

Trikafta improved lung function by around 14 percent in clinical trials, compared with a roughly 3 percent improvement in patients treated with Orkambi.

Analysts expect the early approval to accelerate the launch date for Trikafta, which they expect will make $630 million in 2020.

Preston W. Campbell, III, M.D., president, and CEO of the Cystic Fibrosis Foundation, said in a statement the FDA’s approval “marks a tremendous breakthrough and exciting news for people with cystic fibrosis.”

“This milestone is the result of an extraordinary community working together against great odds, and we are overjoyed that this will mean more people will have effective treatments for their disease.”

2019-10-22T04:50:03-05:00
Go Back: Life Style
Previous: Ethical Dairy Farmer Sells Milk Produced Without Separating Calves From Their Mothers
Next: 7 Good Reasons to Include Swimming in Your Exercise Routine to Improve Your Health
source : www.theepochtimes.com
''