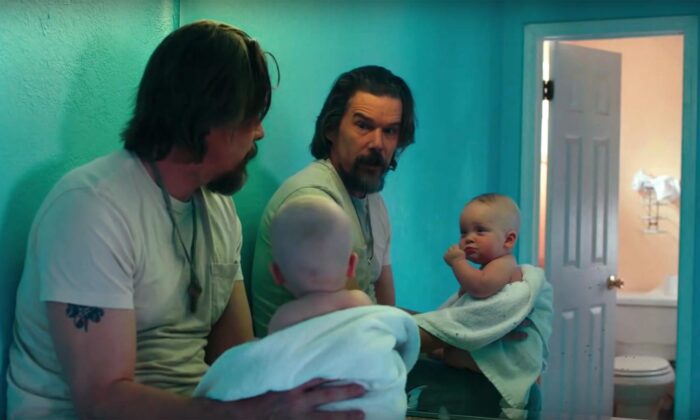 “Adopt a Highway” is a haunting yet hopeful road movie that marks the directorial debut of Logan Marshall-Green. From the outset, we see that Marshall-Green and his superbly skilled crew have carefully studied the indie film ethos, as his equally nascent cinematographer ‎Pepe Avila del Pino captures some poignant opening shots of a man being released from prison.

Newly freed, ex-con Russell Millings (Ethan Hawke) has a lot on his mind. Having been imprisoned for possession of narcotics with the intent to distribute, marijuana in this case, he finds that the world has changed immensely during his 20-year lockup. All around him are new technological advances that bewilder him—everything from the internet to cellphones and even the capability to send emails. All of these are alien to him.

Avila del Pino takes his time with shots, as if to force us to behold the irony of Russell’s situation. He’s now free, yet still tethered to the parole board and its system and all that comes with doing hard time. Hawke imbues his character’s rather precarious situation with a muted listlessness evident in his droopy-shouldered posture and somber expressions, at least during the film’s first act.

One of the more memorable events of the 1990s was the highly controversial “three-strikes” law. During that time, legislators signed into law the ability for courts to hand down mandatory lifetime prison sentences for those convicted of three felony-grade offenses. Unfortunately, the state of California expanded on this law by requiring that misdemeanor-grade offenses be treated as severely as felonies.

That law, plus little in the way of employment programs for those returning to society, caused many people to fall through the cracks, never to re-emerge.

Russell was one who was snagged up by this very law for a relatively low-level crime, and he had to pay the piper in a very severe way. Released from prison, he’s returned the belongings he initially came to prison with, two decades prior: some clothes, an old watch, and some keys. From there, he lands a job as a dishwasher at a local restaurant and attempts his first forays into an almost unrecognizable society.

You’d think the film would lock on to the initial sense of melancholy and curbed prospects. But Marshall-Green (who also wrote the script) suddenly takes us for an unexpected detour. While visiting a dumpster near his lodgings one evening, Russel hears the faint mewling of a baby from inside of it.

He discovers a gym bag with a discarded infant in it. The only thing accompanying the unwanted babe is a piece of paper with the scribbled words: “Her name was Ella.”

Russell is struck with a sense of uncertainty for a moment. When he regains his composure, his bewilderment is subtly replaced by resolve; the baby must be rescued. The ex-con understands the correlation between the forsaken baby and his own forsaken life. Society views ex-cons as disposable. Hence, he makes it his mission to care for Ella.

However, their bonding is short-lived. One day, Ella falls off his motel-room bed and is injured. Panicked, Russell takes her to the local hospital where she is quickly taken from him. Harboring a foundling without notifying the police—no matter the intentions—is considered felony kidnapping in the eyes of the authorities. As such, Russell’s parole, along with his newfound freedom, is threatened.

At the end of the film, Marshall-Green again deviates from the predictable. There is a sense that there is yet hope for Russell, as if some sort of rebirth is still possible.

Hawke’s performance as an ex-con trying to adapt to a sometimes indifferent society is extraordinarily understated, and he uses his considerable acting chops to convey Russell’s challenges. In his triumphant directorial debut, Marshall-Green even manages to weave patches of subtle, wry humor into the script, elevating the story with occasional slivers of brightness.

“Adopt a Highway” is a film that touches on the overly severe three-strikes law and the many people who had their lives ruined by it. But it’s also about second chances and moving on with one’s life, despite its challenges.

Woody Allen Says ‘Professionally, I Haven’t Suffered’ and Criticizes Actors for Denouncing Him

Spike Lee: ‘I’m Not Going to a Movie Theater’ Until There’s a Vaccine

John Malkovich speaks out against 'outrage culture,' warns of 'tidal wave of idiocy' for comedians
Madonna hit with backlash for video ‘tribute’ to George Floyd of her son dancing: ‘Self-absorbed celebrity’

What is Reese Witherspoon's net worth?

Everything coming to and leaving Hulu in June 2020