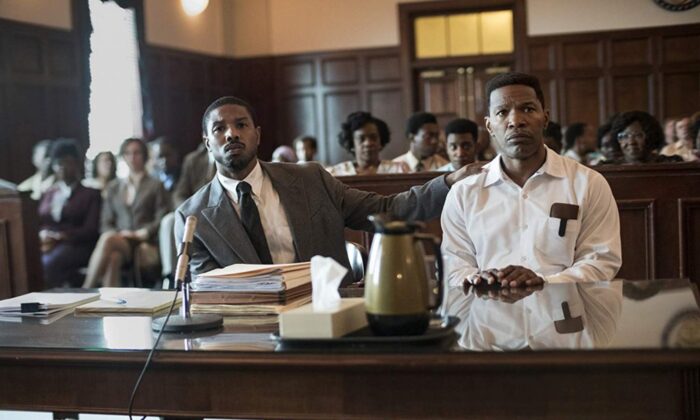 What if your freedom is taken away for a crime you didn’t commit? That’s a powerful and frightening thing to ponder, isn’t it? So, it’s not surprising that it makes for great movie plots, especially for courtroom dramas that play with the heartstrings while offering food for thought.

Director Destin Daniel Cretton’s (“Short Term 12,” “The Glass Castle”) new biographical sketch “Just Mercy” opens with the soon-to-be inmate Walter McMillian (Jamie Foxx) looking into the sky appreciatively. Soon, the African-American lumber worker from Monroeville, Alabama, is arrested for the murder of a young white lady. From the outset, it’s painfully clear that McMillian is innocent. This all really took place in 1987.

After these events, we’re introduced to a newly minted attorney named Bryan Stevenson (Michael B. Jordan), who up and moves to Alabama with one noble mission in mind: to defend death-row prison inmates whom he feels have been wrongly convicted of capital crimes.

Soon, Stevenson becomes involved in McMillian’s case, which seems to be egregiously in error; circumstances surrounding the case are specious at best. We’re also introduced to a local advocate named Eva Ansley (Brie Larson), who is supposedly there to assist Stevenson in his righteous defense of McMillian. However, she is barely seen during the film’s rather lengthy 136 minutes.

Almost immediately, it becomes evident to Stevenson that McMillian’s case is going to be an arduous, uphill battle. He fires off appeal after appeal to get McMillian freed, but both the local community and the courts are full of racists and corrupt governmental officials.

The real-life story is a supremely compelling one, a David versus Goliath narrative that would seem tailor-made for a film. Unfortunately, although guided by a decent script and some great acting, in Cretton’s hands, the experience plays out in a hackneyed manner.

Not for Lack of Talent

Michael B. Jordan is one of the more versatile actors in Hollywood these days. He’s thrilled us with the electricity of Adonis Johnson in the “Creed” series and has also played one of the best supervillains in some time: Erik Killmonger in “Black Panther.”

Here, he changes faces again and disappears into his role as the righteous and noble Stevenson, trying his best to free an innocent man. There are some disturbing scenes where the attorney gets trounced by the system and Jordan portrays Stevenson’s quiet despair; you can see and feel the anguish reflected in his eyes.

But all of Jordan’s gravitas seems wasted here, as this film is too straightforward. There’s no nuance to engage the mind. You know right from the outset that McMillian is innocent and good and that the local police and courts are all devious and bad. There’s even an ardently evil district attorney named Tommy Champan (Rafe Spall) whose over-the-top sneering and posturing verges into cartoonish.

Like Jordan, Foxx is believable as McMillian, and there are some heart-rending scenes he pulls off that seem natural and organic. He also has more to work with since his role is multifaceted. His performance as an innocent man with a limited amount of time left in his life oscillates between quiet rage, a sorrowful sense of despair and anguish, and everything in-between. McMillian’s flashbacks of looking up into the sky as a former free man are dreadfully sobering.

Having said that, the film lacks authenticity in many areas. It’s as if the filmmakers shot a bunch of compelling scenes and then stitched them all together. It leads us by the nose from one dramatic scene to the next, each reaching an emotional crescendo, but ultimately these rarely impact the overarching narrative. Some of these even register as emotionally manipulative: Was the film designed strictly to snag awards, instead of just delivering a genuinely intriguing film?

By the time “Just Mercy” arrives at its melodramatic, predictable ending, we feel that we’ve seen all of this before. Although punctuated by great acting performances, these alone can’t elevate this film from its all-too-pedestrian moorings.

Go Back: Entertainment
Previous: ‘Joker’ Leads Oscar Nominations With 11
Next: Alec Baldwin blasts Trump supporters, blames them for ‘near moral collapse of this country’
source : www.theepochtimes.com
''