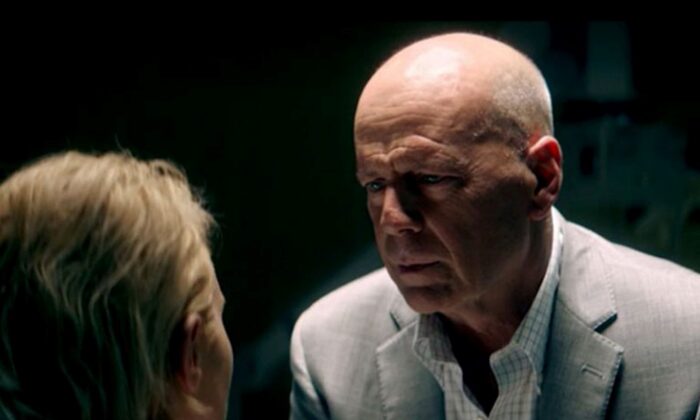 When it came to action cinema, the 1980s crime thrillers were part of the defining zeitgeist of that decade. Screenwriters and directors came up with highly creative ways to tell their stories. From the crude comedy that somehow worked in “48 Hours” (1982), to the unusually structured storyline in “To Live in Die in L.A.” (1985), the decade marked a fascinating time for these types of films. Neo-noir films were in full swing.

Of course, many of them had dopey scripts and far-fetched plotlines, but at least they didn’t have the mean-spirited, torture-porn drivel that you see in action cinema these days. And if the old films did approach these topics, they were usually purposeful and artistically done.

None of this is lost on director Matt Eskandari and screenwriter Paul Da Silva, who seem to have channeled the aforementioned era with their new action thriller “Trauma Center.”

Bruce Willis plays police detective Wakes, who is on a quest for vengeance. He’ll stop at nothing to get revenge on those who killed his partner as well as a valuable informant.

The heroine of the film is Madison Taylor (Nicky Whelan), who happens to witness the murders and is struck by a bullet in the leg by the assailants. But there’s a big problem looming: The murderers happen to be crooked cops—Sergeant Tull and Detective Pierce (Texas Battle and Tito Ortiz, respectively).

Madison winds up in the isolation ward of a hospital, which happens to be empty, and although Detective Wakes vows to protect her, he assigns a single uniformed policeman to guard outside her door and promptly disappears to investigate the two murders. Since the two dirty cops have compounded their problems by leaving alive a witness to their killings (they killed Wakes’s partner because he had dirt on their illegal dealings), they set out to track Madison down and eliminate her, thereby tying up the lone loose end.

The bulk of the film revolves around Madison playing a lethal game of hide-and-seek with the two would-be murderers, who stalk her through the darkened halls and rooms of the forlorn hospital. With a minimum of resources at her disposal, will she survive the night in the stark, soulless, dimly florescent lit hallways, or will she succumb to the dastardly designs of her pursuers?

Could Use More Bruce

One of the first things that struck me about this film was that, although both the cinematography and directing were pretty standard, the set design was well-done. The hospital looked truly spooky and lent a sense of gloom to the proceedings.

Many of the usual tropes of the genre are utilized here, and that isn’t necessarily a bad thing. After all, it is a crime action-thriller and you have to stick to certain norms. And that’s exactly what you get—in other words, they’re not trying to reinvent the wheel here.

Unfortunately, Willis doesn’t appear in the film that much, which is kind of a drag since he’s such a charismatic actor and would have given much more heft to the film. It becomes gravely apparent as the film lumbers on that Whelan, Battle, and Ortiz can’t carry the film by themselves. If Willis had been creeping through the dim halls of the hospital along with Whelan, or at least been somewhere in the building, it could have been a much more intriguing film.

“Trauma Center” does evoke the crime thrillers of the ’80s at certain junctures, and it’s nice to see that the action here is pretty tame compared to the grotesque displays seen in much of today’s cinema. But as it stands, it’s a serviceable film that will probably please die-hard (pun intended) fans of the genre.