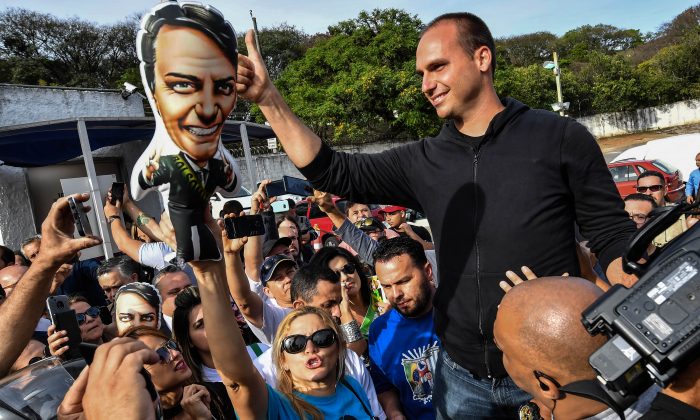 The son of Brazilian right-wing presidential candidate Jair Bolsonaro, Eduardo Bolsonaro, gives his thumb up to his father's supporters gathering in front of the Israelita Albert Einstein Hospital in Sao Paulo, Brazil, on September 16, 2018 after it was announced that their stabbed leader left the intensive care unit. - Brazil presidential election front-runner Bolsonaro was stabbed by a left-wing activist on September 6 during a campaign rally in the southern state of Minas Gerais. (Photo by Nelson ALMEIDA / AFP) (Photo credit should read NELSON ALMEIDA/AFP/Getty Images)
Updated: 2019-11-14 06:10:09

RECIFE, Brazil—President Jair Bolsonaro came to office in Brazil, after just over a decade of rule by the socialist Workers’ Party, by offering a new way to govern and address the country’s problems, with an emphasis on the economy and public safety.

Almost a year into his presidency, Bolsonaro counts among his successes the recent approval of Social Security reforms, estimated to save 800 billion reals ($195 billion) over the next decade; a 22 percent reduction in crime; the generation of 760,000 new jobs; and the conclusion of a new trade agreement with the European Union through Mercosur.

Brazil has sought to reduce state ownership through the privatization of state-owned enterprises and by offering concessions to private companies, and in just six months, the country received about $28 billion in foreign investment.

The government also recently raised the country’s GDP growth forecast to 0.9 percent, and began a new program to stimulate job creation for 18- to 29-year-olds, with the goal of creating 4 million new jobs.

However, Bolsonaro has experienced some internal problems in his Social Liberal Party, involving discussions with dissenting parliamentarians who are opposed to his actions.

Most recently, amid a corruption probe, he asked the head of the Social Liberal Party to clarify how the party’s funds are being spent. Because his requests were rejected, Bolsonaro announced on Nov. 12 that he’ll leave the party to start a new one.

Partnership With the US

Bolsonaro’s government is seeking to broaden Brazil’s relationship with the United States. In March, following a meeting with President Donald Trump at the White House, Bolsonaro announced new measures aimed at strengthening relations between the two countries.

They include a visa waiver program for Americans wanting to visit Brazil, authorization for the United States to use the Alcântara satellite launch center, and the purchase of an additional 150 million liters of tariff-free U.S. ethanol.

The Brazilian government also intends to start negotiations to enable a free-trade agreement with the United States.

During his 2018 presidential campaign, Bolsonaro said transparency in public spending would be one of his government’s priorities.

In addition to investments in education, Bolsonaro has sought transparency in its management.

Abraham Weintraub, the education minister since April, said in an exclusive interview with The Epoch Times that, under his management, the ministry has sought to be as open as possible in deciding ministry spending, through the use of data, disclosure of expenditures, and the use of objective criteria.

“We are seeking to improve the functioning of the ministry so that we can provide society with better quality education. We have sought to do so through the management, efficiency, accountability, and transparency of all our actions,” he said.

Recently, Bolsonaro and Economy Minister Paulo Guedes presented their economic proposals to the National Congress related to the “More Brasil” plan, which include:

1) A federative pact: Creation of a new fiscal council that will improve the distribution of public money to states and municipalities throughout the country.

2) Public funds: Revision of all government public funds to free up more funds to reduce federal public debt. The government intends to direct some of this money towards poverty reduction.

3) Power to declare a fiscal emergency: A proposal that will seek to reduce mandatory spending through automatically triggering austerity measures once certain spending limits are reached.

For political scientist Nerea Ramirez Garcia, the approval of Social Security reforms was a fundamental step in the restructuring of the Brazilian economy, which underwent a severe crisis under previous governments.

“The approval of the Social Security reform was a great achievement for Bolsonaro, as this will accelerate the improvement of the Brazil economy. However, his departure from the Social Liberal Party is a risky move that could erode his governance with the National Congress,” she said.

Jorge Zaverucha, a political science professor at the Federal University of Pernambuco, said that, in addition to economic development, the Bolsonaro government has also stood out for the absence of corruption scandals.

“Unlike previous governments, the current government is reaching its 11th month of management without any corruption scandal. And besides being good for the country, it meets a demand from the population, which for a long time had been calling for a more honest and transparent policy,” he said.

Go Back: World News
Previous: Whistleblower form secretly altered to include ‘hearsay’ just before impeachment inquiry
Next: Police Officer Charged With Murder in Shooting of Yuendumu Teen Will Plead Not Guilty
source : www.theepochtimes.com
''

USMCA: Auto Sector Can Adapt, but Dairy Industry Will Take a Hit

Canadian Opinions Turbulent on Airlines COVID-19 Plans, According to Poll