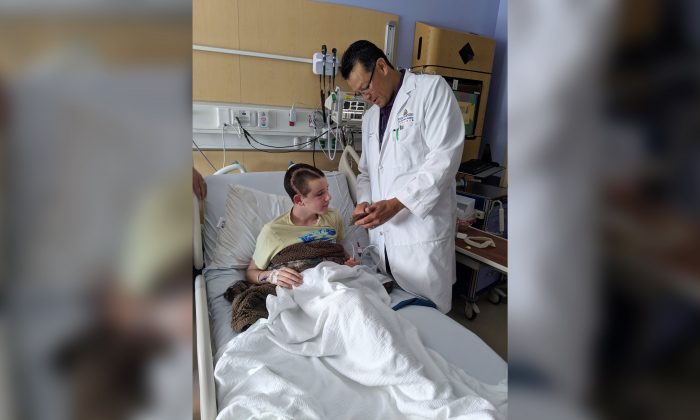 A Florida 14-year-old dubbed “Anchorman” miraculously survived being impaled through the skull by a boat anchor.

Caleb Bennett, of Manatee County, was fishing with his friends and brother six months ago when the anchor slipped from the boat and impaled the young man through the forehead.

“The anchor fell off the front,” Caleb’s father, Rick, told WTSP. “They were driving fast and when the rope pulled tight it sling-shot up into the boat.”

After grabbing onto the anchor to hold it still and prevent it from further tearing into his brain, the teenager asked his friend to call 911. He told WTSP he thought, “I was probably going to die.”

His mother, Kelli Bennett, said the anchor had penetrated nearly 3 inches into her son’s right frontal lobe.  “Needless to say, I kind of lost it,” she told CNN of her reaction to learning of her son’s devastating accident.

Her son was rushed to Johns Hopkins All Children’s Hospital in St. Petersburg and placed in a medically-induced coma.

“I don’t remember going to the hospital,” the teen told WTSP, adding, “but when I woke up five days later, my parents said… they took out part of my head.”

Pediatric neurosurgeon Luis Rodriguez explained to CNN that emergency surgery was performed on the teen to remove part of his frontal lobe to prevent pressure from building up in his skull and further damaging his brain.

Surprisingly, within 10 days, the young man had recovered enough to walk out of the hospital on his own.

“The doctor said there’s no way around it: This kid is a walking miracle,” Caleb’s father told WTSP.

“I’ve seen things like this, but I’ve never seen an anchor, number one, and number two, I’ve never seen anybody with an injury like that walk out of the hospital almost completely neurologically intact,” Rodriguez said, CNN reported. “That’s one in a million.”

His parents said that while he suffers from occasional minor seizures, his recovery has been incredible.

“He should’ve died right where he stood,” his father said. “Even if this is our cross to bear for a while or indefinitely, it’s better than the alternative.”

Toddler Survives Falling on an Iron Rod That Skewered His Chest

Caleb Bennett’s miraculous recovery recalls the case of a 3-year-old who fell from a building and was impaled on a six-foot-long metal rod.

On April 8, toddler Nadeem, 3, was playing with his friends on the third floor of a building in Uttar Pradesh, India, when he suddenly fell 30 feet onto a six-foot-long iron rod.

According to The Sun, an electrician saw the freak accident and found Nadeem in a fetal position with the rod sticking through his left thigh, lower abdomen, and upper back.

The man, acted quickly to cut the protruding part of the rod and rushed Nadeem to King George Hospital, 5 miles away.

“Initially, we did not know which internal organs had been punctured by the rod, and as such pulling out the rod would have been detrimental to his life,” doctor Samir Mishra, who was part of the medical team that saved Nadeem’s life, told The Sun.

The boy spent two weeks recovering in hospital and was discharged on April 22. He has since made a full recovery.

Follow Tom on Twitter: @OZImekTOM
Go Back: Life Style
Previous: Some 'Podunk' Town In The Middle Of Nowhere
Next: Benefits of Extreme Temperature Workouts Are Lukewarm
source : www.theepochtimes.com
''