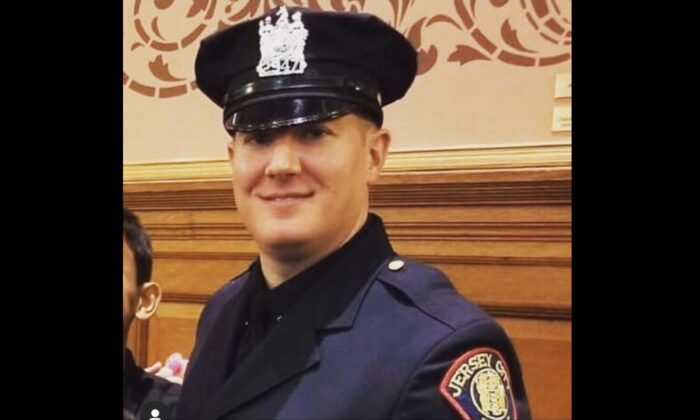 A charitable foundation that supports the families of fallen first responders announced on Friday that it will pay off the mortgage for a family of a police detective who was shot and killed in Jersey City this week.

Detective Joseph Seals, 40, was killed on Tuesday in Bay View Cemetery during a shootout between police and two suspects; David Anderson and Francine Graham, that stretched over several hours.

The Stephen Siller Tunnel to Towers Foundation announced during a ceremony at city hall in Jersey City that it will be paying off the mortgage on Seal’s North Arlington home before Christmas.

“To the family of detective Joseph Seals, the Tunnel to Towers Foundation is going to pay your mortgage before Christmas so that you never have to worry about your mortgage again,” said Frank Siller, the foundation’s CEO and chairman.

Seals had confronted Anderson and Graham in their stolen U-Haul van before they went on to gun down three more people at a Jewish market.

Officers said the pair, who were later shot by police, had likely been planning to kill far more people.

The three other victims have been identified by officials as Moshe Deutsch, 24; Leah Minda Ferencz, 33; and Miguel Douglas, 49, of Jersey City. Several other officers sustained injuries following the shoot out, officials said.

Seals was a 13-year veteran of the department and worked out of the Jersey City Police Cease Fire Unit, which is tasked with getting illegal guns off the street. Authorities say that dozens of guns were taken off the streets under his watch. He leaves behind his wife and five children.

“No amount of money will ever bring Joey back, but to lift the burden of their mortgage off of Laura so she can grieve and raise her children means more to the family than anybody will ever know,” Seal’s cousin, Justin Smith, said at a press conference at City Hall.

Smith also thanked officers and members of the public for their “phenomenal support,” adding “we couldn’t have asked for more, I truly want to thank Tunnel to Towers.”

Seals’ mortgage will be added to Tunnel to Towers’ Fallen First Responder Home Program, which began in December 2014 to support law enforcement and firefighters who have lost their lives under extraordinary circumstances in the line of duty.

The public has been invited to contribute funds.

The Tunnel to Towers Foundation was created to honor the life and legacy of Stephen Siller, a New York City firefighter who laid down his life to save others on Sept. 11, 2001.

According to its website, the foundation “provides significant financial support in the form of trust accounts and mortgage payoffs to those who left behind by first responders who have lost their lives in the line of duty.”

A funeral service will be held for Seals on Dec. 17 at 10 a.m. at St. Aedan’s Church on Bergen Avenue in Jersey City.

Go Back: US News
Previous: Rep. Peterson will vote against impeachment, and says 4-5 other Democrats ready to join him
Next: Trump Touts New Pro Sports Option for Service Academy Athletes
source : www.theepochtimes.com
''

Trump and Biden Campaign in Minnesota, Lay Out Differing Visions for Job Creation