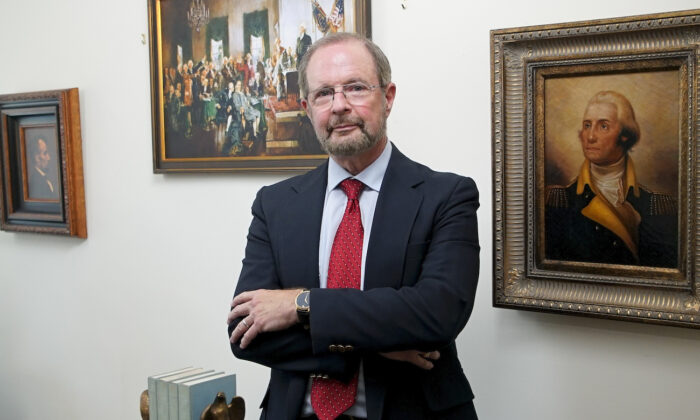 Dr. Robert Epstein, a senior research psychologist at the American Institute for Behavioral Research and Technology and former editor-in-chief of Psychology Today, in Washington on Sep. 4, 2019. (York Du/NTD)
Updated: 2020-11-26 12:16:04

Google shifted a “bare minimum” of six million votes in the Nov. 3 presidential election by pushing its political agenda onto its users, a research psychologist has claimed.

In an interview with Fox News’ “Tucker Carlson Tonight,” Dr. Robert Epstein, a senior research psychologist at the American Institute for Behavioral Research and Technology in California, suggested that the big tech company’s search manipulation could have prompted millions of Americans to shift their votes toward Democrats.

“Google search results were strongly biased in favor of liberals and Democrats. This was not true on Bing or Yahoo,” Epstein said, referring to a team he put together to monitor the activities of big tech companies in the run up to the 2020 election.

The project team recruited “a diverse group of 733 registered voters, Republicans, Democrats, and Independents,” from “three very critical battleground states: Arizona, Florida, and North Carolina,” who were then equipped with special software that tracked their activity on the internet, such as searches on Google, Bing, and Yahoo.

“The bias was being shown to pretty much every demographic group we looked at, including conservatives … conservatives got slightly more bias in their search results than liberals did. How do you account for that?” Epstein said.

Epstein told The Epoch Times this month that the software gave the project team the ability to see–with the agents’ permission—all election-related activities on the internet performed by the field agents, allowing the team to capture ephemeral content such as search results, reminders, search suggestions, and newsfeeds.

“We also found what seems to be a smoking gun,” Epstein continued. “That is, we found a period of days when the vote reminder on Google’s homepage was being sent only to liberals—not one of our conservative field agents received a vote reminder during those days.”

He said that when he went public with his research on Oct. 29, Google “backed off.”

“They literally shut off that manipulation that night, and so for four days before the election they were showing vote reminders to everyone, finally,” he continued.

“The bottom line at the moment is that these manipulations, the ones that we’ve so far quantified, could easily have shifted at least 6 million votes in just one direction,” Epstein added. “That’s the bare minimum at this point, that I’m confident. The maximum we haven’t even begun to estimate that yet because we have so much data to look at.”

Google, the world’s largest internet company with some 100,000 employees and more than $130 billion in annual revenue, has long been accused of channeling the politics of its mostly left-leaning workforce into its products, which the company has repeatedly denied.

Google did not immediately respond to a request for comment by The Epoch Times.

Responding to Epstein’s research, Sens. Ron Johnson (R-Wis.), Ted Cruz (R-Texas), and Mike Lee (R-Utah) submitted a letter on Nov. 5 to Google CEO Sundar Pichai requesting clarification of his testimony to the House Committee on the Judiciary and his response to senators’ written inquiry from August.

Cruz accused big tech companies of presenting a “grave threat” to free speech in the United States and election integrity.

“Google has more power than any company on the face of the planet, and Dr. Epstein’s findings raise serious concerns about Google’s abuse of that power and its willingness to manipulate its platform to help Joe Biden win the presidency. Google must provide answers as to why and how it manipulated users to influence this election,” he said in a statement.

Ella Kietlinska and Jan Jekielek contributed to this report.