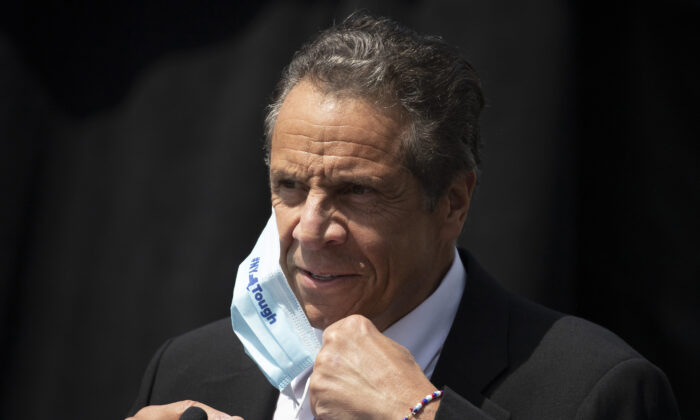 New York Gov. Andrew Cuomo (D) sympathized with President Donald Trump this week over purported media bias, claiming that the national press has taken on a “nastier tone” with the president than before, and that reporters should respect the office of the President.

The Democratic governor made the remarks Monday during an interview with WAMC radio, saying that he had noticed a “disrespect that never existed” nationwide toward the president.

“The way they question President Trump at some of these press conferences is just—I’ve never heard that tone with the president,” he added.

When questioned by Chartock about whether Trump “deserved” the treatment, Cuomo said that there should be a certain “decorum” when dealing with the office of the president.

“There are reporters who just are unprofessional, don’t know the facts, and ask really biased questions,” Cuomo said. “You want to say, ‘Well, I don’t like the president and I disrespect him.’ I know but it’s still the office of the president.

“I’ve watched hundreds of press conferences over the years. If anyone used the tone that they use with me in some of these press conferences—if you did that with my old man, you’d be lucky if he didn’t walk around and deck you,” Cuomo added, referring to his late father Mario Cuomo, who served as New York governor for three terms, from 1983 to 1994.

The president often accuses the press of treating him unfairly, and has labeled a number of media outlets “fake news.”

The New York governor and Trump have long feuded over the federal response to the CCP (Chinese Communist Party) virus pandemic. In July, Cuomo accused Trump of “enabling the virus” with his messaging on the pandemic.

On Nov. 15, Cuomo threatened to sue the Trump administration over its vaccine distribution plan, arguing that it “does not provide an equitable vaccine process.”

The Democratic governor has previously argued that the Trump administration’s vaccine distribution plan relies too heavily on hospitals, clinics, and drug stores to deliver the vaccine to people, and that communities of color may have limited access to the country’s public or private healthcare systems.

“I tell you today, if the Trump administration does not change this plan and does not provide an equitable vaccine process, we will enforce our legal rights. We will bring legal action to protect New Yorkers,” the governor said during a Sunday morning service in Manhattan’s Riverside Church.

“I’m not going to allow New Yorkers to be bullied or abused,’’ he added, referring to President Donald Trump’s recent statement that he may withhold the delivery of COVID-19 vaccines to the state over Cuomo’s previous criticisms.

The Trump administration’s Operation Warp Speed has supported the Department of Health and Human Services (HHS) in laying out a plan that would involve both large chain pharmacies and networks representing independent pharmacies and regional chains, covering around 60 percent of pharmacies in all 50 states, the District of Columbia, Puerto Rico, and the U.S. Virgin Islands.

It includes names such as Albertsons, Costco, CVS, Publix, Walgreens, and Walmart.

The HHS said partnering with networks will expand vaccine availability to traditionally underserved areas through regional chains and independent pharmacies, noting that the vast majority of Americans live within five miles of a pharmacy.

Erection in Portland
Who will preside over the Senate trial?
Biden administration defends removing Churchill statue from Oval Office

Another teachers union refuses to return to work

Trump impeachment manager Swalwell on trial: 'If the Senate allows witnesses, we will be ready with witnesses'