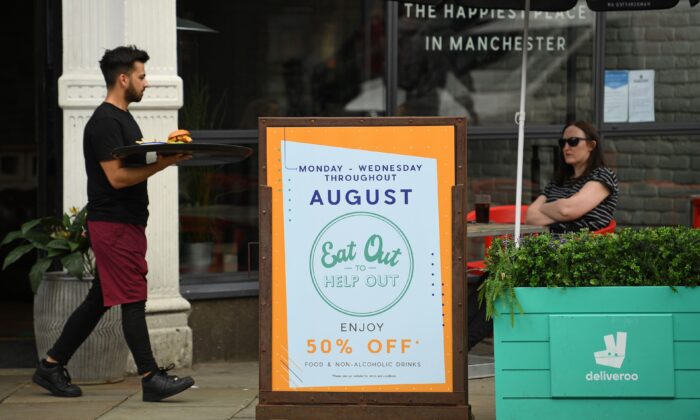 A server carries food past a sign promoting the British Government's "Eat Out to Help Out" scheme to get consumers spending again, outside a restaurant in Manchester, northwest England, on Aug. 3, 2020. (Oli Scarff/AFP via Getty Images)
Updated: 2020-08-03 20:31:03

For those who live in the UK, up to 10 pounds ($13) of your restaurant bill will be paid by the government if you eat out on a Monday, Tuesday, or Wednesday at participating venues throughout August.

Launched on Aug. 3, “Eat Out to Help Out” is a government scheme to help struggling restaurants to get back on their feet, after the hospitality industry took a huge hit due to lockdown measures to curb the spread of the CCP (Chinese Communist Party) virus, commonly known as the novel coronavirus.

“Anyone visiting a participating restaurant, café, or pub on Mondays, Tuesdays, and Wednesdays throughout August will receive the half price discount,” the government said in a statement.

It applies to all food and non-alcoholic drinks, giving customers a maximum discount of 10 pounds per person.

More than 72,000 restaurants have registered for the scheme, Finance Minister Rishi Sunak said.

Matt Healey, 23, who works in digital marketing for Warner Bros., was glad his cooked English breakfast would cost him half the usual price at Maggies, a cafe in Lewisham, south east London.

But he said the priority for him remained the health risks of eating out during the pandemic over the discount.

“It’s a bit of a balancing act,” Healey said. “I think the risks will probably outweigh the 50 percent off.”

Eat-in restaurants were closed for over three months due to the CCP virus pandemic, and many staff were put on the government’s job retention scheme, which cushioned the impact of the pandemic on the job market. However, the unemployment number is set to surge as the scheme winds down.

According to the government, “8 percent of the UK’s workforce—over 2.4 million people—rely on hospitality, accommodation, and attractions for employment. Of this, food and beverage services (pubs, restaurants, cafes etc) account for 1.8 million jobs.”

Some critics say the Eat Out to Help Out scheme should not include fast food restaurants, which could exacerbate the UK’s obesity problem. Last week, Prime Minister Boris Johnson’s targeted obesity, citing it as one of the risk factors for increased death or severe illness from the CCP virus.

Reuters contributed to this report