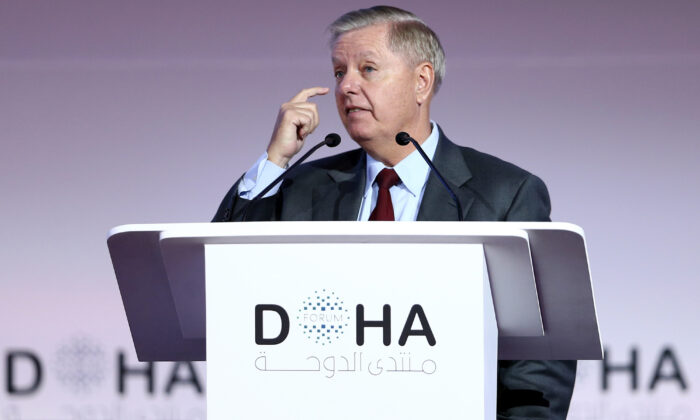 U.S. Sen. Lindsey Graham (R-S.C.), Chairman of the Senate Committee on the Judiciary, speaks during a plenary session of the Doha Forum in the Qatari capital on Dec. 14, 2019. (MUSTAFA ABUMUNES/AFP via Getty Images)

Sen. Lindsey Graham (R-S.C.), chairman of the Senate Judiciary Committee, said that he will do everything he can to make the Democrat-led impeachment effort “die quickly” in the Senate.

“This thing will come to the Senate, and it will die quickly, and I will do everything I can to make it die quickly,” he said.

Graham made the remarks on Saturday during an interview with CNN‘s Becky Anderson at the Doha Forum in Qatar.

“I think the best thing for America to do is get this behind us,” Graham said, adding that he didn’t think it would be helpful to hear from any more witness and would prefer to proceed to a vote based on the records presented to the House.

“If you don’t like President Trump, you can vote against him in less than a year. It’s not like a politician is unaccountable if you don’t impeach them,” Graham said.

“Clearly, I wasn’t a fan of his campaign, right? But here’s the way it has to work. When you lose, accept it.

“The American people didn’t believe that [Trump was, as his critics said, a race-baiting, xenophobic, religious bigot]. They made him their president.”

House Judiciary Democrats approved two articles of impeachment against Trump on Friday, one for abusing the office of the presidency and the other for obstructing the Congress, on a party-line vote, The Epoch Times reported.

Senate Majority Leader Mitch McConnell (R-Ky.) later told reporters at a weekly press conference that the Senate has yet to decide on the process that the Senate trial will follow if Trump is impeached by the House.

“It could go down the path of calling witnesses and basically having another trial, or it could decide—and again 51 members could make that decision—that they have heard enough and believe they know what would happen, and could move to vote on the two articles of impeachment sent over to us by the House,” he said.

During an interview with Fox News before House Judiciary Democrats approved the articles of impeachment, McConnell said he will coordinate with the White House counsel’s office and the people who are representing the president to figure out how to handle the impeachment process in the Senate.

“There will be no difference between the President’s position and our position as to how to handle this to the extent that we can,” he said, adding, “We have no choice but to take it up.”

Mitch McConnell: Everything I do during this, I’m coordinating with White House Counsel. There will be no difference between the President’s position and our position as to how to handle this pic.twitter.com/baFaTKWvUl

He also told Fox News that there was “zero chance” that Trump will be removed from office and that one or two Democratic Senators may vote with his caucus.

Trump said he did not have a preference for either a long Senate trial or a short one.

“Look there is—we did nothing wrong. So I’ll do long, or short,” he told the reporters. “I’ve heard Mitch, I’ve heard Lindsey. I think they are very much in agreement on some concept. I’ll do whatever they want to do. It doesn’t matter. I wouldn’t mind the long process, because I’d like to see the whistleblower, who’s a fraud.”

They pay women in Mexico to get pregnant and then abort as part of an experiment
Larwyn’s Linx: The War For The Democratic Party Will Destroy Lives And Change Our Country

US Drug Overdose Deaths Drops for First Time Since 1990

4 Killed, One Injured in Family Shooting in Utah Suburb