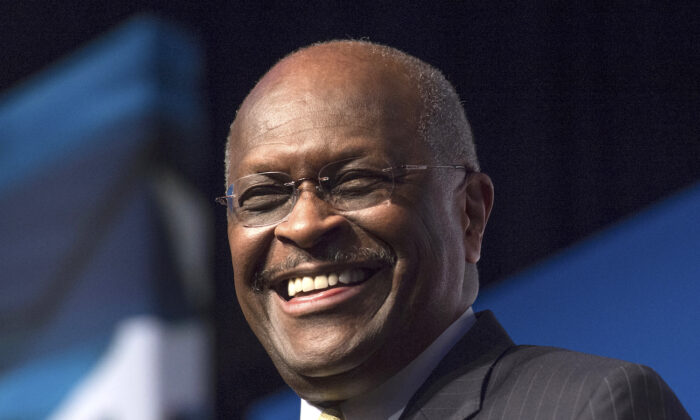 A statement on his Twitter account on Thursday said that Cain was informed he had tested positive for COVID-19 and developed “symptoms serious enough that he required hospitalization” by Wednesday.

COVID-19 is the disease caused by the CCP (Chinese Communist Party) virus, the novel coronavirus that emerged from Wuhan, China, in late 2019.

Cain did not need a respirator and by Thursday, he was “awake and alert” and “resting comfortably in an Atlanta-area hospital,” the statement continues.

We are sorry to announce that Herman Cain has tested positive for COVID-19, and is currently receiving treatment in an Atlanta-area hospital.

Please keep him, and all who are battling this virus, in your prayers.

Our full statement appears below. Updates to follow. pic.twitter.com/lDRW7Rla4e

Cain had attended President Donald Trump’s campaign rally on June 20 in Tulsa, Oklahoma. According to a photograph taken on the day, Cain was seated next to several people. None of the group, including Cain, were wearing a face mask.

The statement on Twitter announcing Cain’s positive COVID-19 test noted that there is “no way of knowing for sure how or where Mr. Cain contracted the coronavirus.”

It also noted that Cain is “a fighter who has beaten Stage 4 cancer.”

“With God’s help, we are confident he will make a quick and complete recovery, and will soon resume hosting The Herman Cain show at HermanCain.com, and Herman Cain’s America on NewsmaxTV,” the statement concluded.

According to the Trump campaign, Cain did not meet with the president at the rally.

“I realize people will speculate about the Tulsa rally, but Herman did a lot of traveling the past week, including to Arizona where cases are spiking,” Dan Calabrese, editor of HermanCain.com, wrote on the website. “I don’t think there’s any way to trace this to the one specific contact that caused him to be infected. We’ll never know.”

In 2006, Cain had received a diagnosis of stage-four colon cancer. By 2011, Cain said he was free of the cancer and crediting his recovery to God.

Cain, 74, a former pizza company executive, ran for the Republican presidential nomination in 2012. He was best known for his tax proposal called the “9-9-9 plan,” which proposed a 9 percent income tax, a 9 percent federal sales tax, and a 9 percent business transaction tax.

Cain has been an outspoken backer of Trump, and was named by the Trump campaign as a co-chair of Black Voices for Trump.

Read More
Trump Campaign Relaunches in Tulsa: ‘We’re Going to Stop the Radical Left’
Follow Mimi on Twitter: @MimiNguyenLy
Go Back: US News
Previous: Wakey Wakey: a Video
Next: Father of 19-Year-Old Victim Who Died Inside Seattle’s CHOP Says He Still Doesn’t Know What Happened to His Son
source : www.theepochtimes.com
''