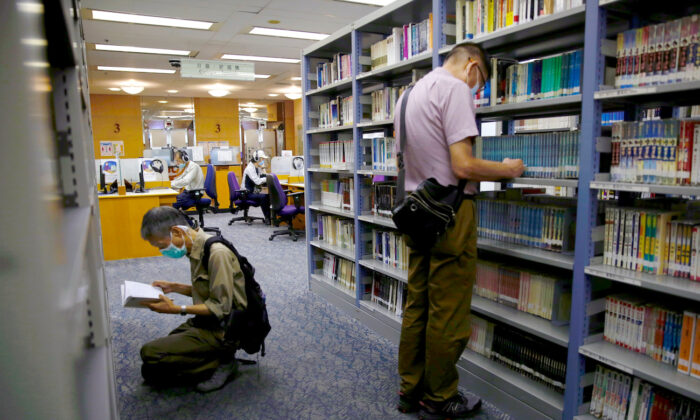 Books written by prominent Hong Kong pro-democracy figures have been removed from library shelves across the city in the wake of Beijing’s national security law, which came into effect last week.

A government department said Sunday that books have been pulled from the shelves of public libraries for review to see whether they violate the Chinese communist regime’s new draconian law, which was imposed at 11 p.m. on June 30 after ceremonial votes.

The sweeping legislation stipulates that offenders, if convicted of secession, subversion, terrorism, or collusion with foreign forces, could be imprisoned for life. Critics fear the law will be used to crack down on those critical of the Chinese Communist Party (CCP).

Public Hong Kong libraries “will review whether certain books violate the stipulations of the National Security Law,” the Leisure and Cultural Services Department, which runs the libraries, said in a statement.

“While legal advice will be sought in the process of the review, the books will not be available for borrowing and reference in libraries.”

No sooner is Xi Jinping’s “national security” law imposed on Hong Kong than they figuratively are burning books, removing pro-democracy titles from libraries. Once more, the Chinese Communist Party is afraid of the free exchange of ideas. https://t.co/bDYtT6BEud pic.twitter.com/m1wJeWYobU

A search for books by young activist Joshua Wong or pro-democracy politician Tanya Chan on the public libraries website showed the books, including “Unfree Speech,” co-authored by Wong, either unavailable or under review.

1/ More than just punitive measures, the national security law also imposes a mainland-style censorship regime upon this international financial city. Although my books are published years before Hong Kong’s anti-extradition movement, they are now prone to book censorship. https://t.co/2fbyvtcH95

According to the South China Morning Post, at least nine books have either been marked as “under review,” or are unavailable.

Concerns have been raised that the legislature breaches Hong Kong’s Basic Law, which guarantees that the International Covenant on Civil and Political Rights can remain in force in the territory.

Under the Sino-British Joint Declaration, which set the terms of Hong Kong’s transfer to Chinese rule in 1997, the regime agreed to grant the city autonomy and freedoms not enjoyed in the mainland, under the formula of “one country, two systems.”

On Monday night, the Hong Kong government published details of Article 43 of the law, which includes police being able to search private properties without a warrant and requiring internet service providers to remove messages from their platforms.

Lam attempted to ease concerns about the law. She said her government was doing more to “protect human rights” by deciding to announce details about Article 43. Taking a page from the playbook of China’s state-run media, Lam said the law “targets only a small group of people” in Hong Kong. She stated that her government will “vigorously implement” the law.

She again called some Hong Kong protesters “radicals” and warned them “not to violate this law or crossing the red line because the sequence is serious.”

With the ink barely dry on the draconian National Security Law, HK authorities are now removing books from libraries, banning political slogans, and requiring censorship in schools. The U.S. condemns these Orwellian assaults on the rights and freedoms of the Hong Kong people.

“With the ink barely dry on the draconian National Security Law, HK authorities are now removing books from libraries, banning political slogans, and requiring censorship in schools,” he added in a Twitter post. “The U.S. condemns these Orwellian assaults on the rights and freedoms of the Hong Kong people.”

On July 2, the Hong Kong government declared the popular protest slogan “Liberate Hong Kong, the revolution of our times” illegal under the national security law since it connotes the idea of a Hong Kong separate from China.

Frank Fang and Reuters contributed to this report.