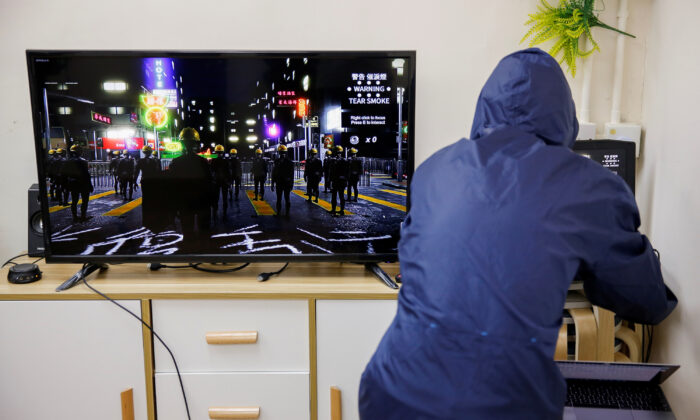 HONG KONG—A group of Hong Kong students have developed a virtual reality game they hope will allow people to experience the pro-democracy demonstrations from the view of a “frontline protester.”

The short but detailed first-person game, demonstrated to Reuters in a shabby, high-rise industrial block, allows players to dodge tear gas, duck behind burning barriers and run from riot police.

“It allows you to experience what crisis the frontline protester might have been through,” said Lam, a 30-year developer who covered her face and did not want to give her full name because she had participated in the often-illegal protests.

“That does not mean you will have to go out after playing the game. We hope people that fight for freedom will go out anyway.”

Protesters are concerned that Beijing is eroding freedoms granted when Britain handed the city back to China in 1997, and have been involved with often-violent exchanges with riot police over the last five months.

Lam, who developed the game with two classmates, said it does not allow protesters to inflict violence or do anything illegal. That would stymie their chances of getting it published by an online distributor, Lam said.

However, she added it did have a “pro-protester” stance.

Virtual reality headsets can be used to experience the game in 360 degrees.

Users can scan the colorful post-it notes that make up the game’s “Lennon Wall”—murals depicting protest slogans such as “fight for freedom” or “five demands, not one less” that are common around real-world Hong Kong. An interactive feature also explains some key events from the protests.

To the developers, the protest game is a form of protest in itself.

A role-playing mobile app game depicting the protest was suspended by Google earlier this month, while gaming giant Blizzard Entertainment suspended Hong Kong esports star Chung “blitzchung” Ng Wai after he called for the liberation of Hong Kong in a post-game interview.

The students said they have submitted their game to an online video game distributor and hope to have it available to the public next month.

Go Back: Tech
Previous: Trump Ads Alongside Russian Propaganda: It's Not Collusion. It's An Algorithm
Next: Number of Kids Watching Online Videos Soars: Survey
source : www.theepochtimes.com
''