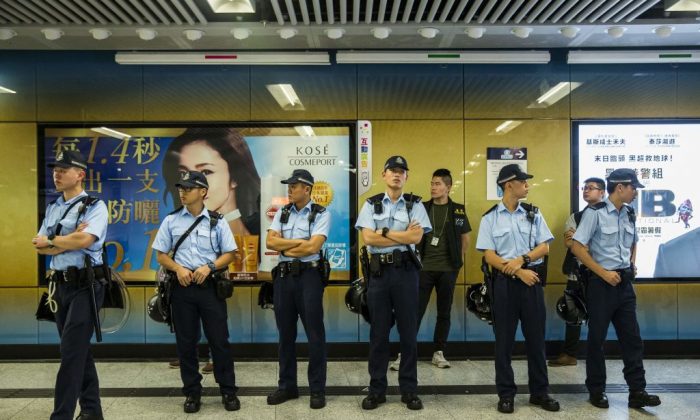 Andrew Leung, the pro-Beijing head of Hong Kong’s Legislative Council (LegCo), announced at a press conference on June 11 how the legislative debate on Hong Kong’s controversial extradition bill will proceed.

He called on a final vote to be held next Thursday on June 20, speeding up the typical legislative process. The move drew criticism from pro-democracy lawmakers.

Several of them rushed to the podium as Leung was talking, and unfurled an “anti-extradition” banner in protest of his decision while shouting at him. Leung cut his remarks short and was escorted away by security guards.

The Hong Kong government first proposed amendments to its extradition laws in February, which would allow the city’s top official, the chief executive, to sign off on extradition requests, including from mainland China, without approval from the LegCo. Currently, the city observes individual extradition treaties with 20 countries, excluding China.

A broad opposition movement has since emerged, arguing that given the Chinese regime’s disregard for the rule of law, the changes could allow Beijing to charge and extradite its critics with impunity.

Despite the public outcry, Hong Kong Chief Executive Carrie Lam stated on June 10 that she would put up the bill before LegCo on June 12 as scheduled.

Lam’s government had insisted that the extradition laws be changed in order to hand over a Hong Konger who is wanted in Taiwan on murder charges for allegedly killing his girlfriend.

Leung announced that a total of 66 hours has been reserved for legislators to hold second readings on the extradition bill.

Debates will now be held every weekday beginning Wednesday, until 8 p.m. local time on June 20.

In Hong Kong, a bill typically goes through a first, second, and third reading. At the first reading, the bill is formally introduced. After debates during the second reading conclude, the LegoCo votes on whether to bring the bill to a third reading. If the majority votes in favor, legislators further debate at the third reading, after which the LegCo makes a final vote on whether to pass it. If passed, the chief executive then signs it into law.

But Leung has fast-tracked the bill by calling for a final vote on June 20.

Because the 70-seat LegCo is currently controlled by a pro-Beijing majority, the bill is likely to pass if brought to a vote.

“I have given the debate a lot of time,” Leung countered. According to Hong Kong Free Press, Leung said he believed the 66 hours was sufficient, since it took 38 hours for the LegCo to pass a joint checkpoint bill last year that was similar in length.

The checkpoint bill, which was also controversial at the time, paved the way for mainland Chinese officials to conduct immigration and quarantine procedures at a section of the West Kowloon Station, which is part of the Guangzhou–Shenzhen–Hong Kong Express Rail Link. Critics condemned the bill for allowing Chinese jurisdiction within Hong Kong territory.

The Civil Human Rights Front (CHRF), organizers of the June 9 march that drew 1.03 million to call on the government to scrap the bill, has called on people to surround the LegCo building every day that the lawmakers are meeting, from 10 a.m. to 10 p.m., in an attempt to dissuade them from passing the bill.

Jimmy Sham, convener of CHRF, stated that local police had been informed about the planned protests outside of LegCo.

The Hong Kong government has already made preparations in anticipation of the protests. According to public broadcasting service Radio Television Hong Kong, two areas near LegCo, the demonstration zone and the lawn at Tamar Park, have already been cordoned off.

According to Hong Kong media HK01, Hong Kong Professional Teachers’ Union, the city’s largest teachers’ union consisting of 100,000 instructors from kindergarten to university, called a press conference on June 11, urging members to attend a rally outside of LegCo on June 12.

In a separate article, HK01 reported that multiple student unions at colleges and universities have decided to coordinate their efforts to boycott classes and join the protests outside of LegCo on June 12. These schools include the Chinese University of Hong Kong, Hong Kong University of Science and Technology, the Hong Kong Polytechnic University, and Hong Kong Baptist University.

Meanwhile, a group of local artists, scholars, and writers gathered at a bridge near the LegCo building and announced as the clock struck midnight on June 11 that they would go on a relay hunger strike in protest to the bill. They called on more people to join them.

Scores of businesses, shops, and organizations also announced that they would close down on June 12 as a sign of protest.

The planned shutdown, which appears to have arisen spontaneously among different sectors of Hong Kong society, include retail outlets, bookshops, cafes and restaurants, a law firm, a Chinese medicine clinic, and engineering and information technology firms.