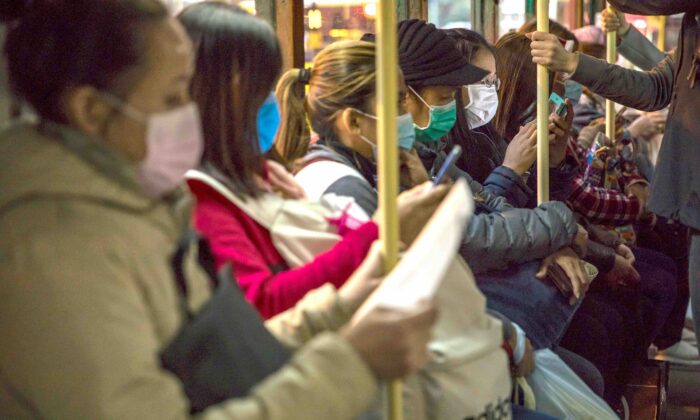 Locals taking part in the march could be heard shouting slogans such as: “The government’s incompetence kills Hong Kong people,” and: “There are no ‘rioters,’ only a tyrannical regime,” according to Hong Kong media.

Pro-democracy lawmaker Andrew Wan Siu-kin said that the designated clinic in Kwai Chung was inappropriate because it is less than 20 meters away from a local residential area, reported Hong Kong media RTHK.

Wan added that the government had dismissed his suggestion to build a temporary clinic in an unused park in Kwai Chung.

There is still strong public dissent in Hong Kong over Lam’s refusal to fully close the city’s border with China. At the time of writing, Hong Kong has 56 known cases of the novel coronavirus—the second-highest outside of mainland China and second only to Singapore with 72 cases.

On Wednesday, local media HKFP reported that 5,000 locals had signed a petition to Hong Kong’s Department of Health opposing the designation of the Kennedy Town Jockey Club General Out-patient Clinic as a COVID-19 treatment center.

District councilor Cherry Wong argued that suspected patients would need to travel through a crowded residential area before reaching the clinic, making it an unsuitable option to contain the coronavirus outbreak, HKFP reported.

Another district councilor, Fergus Leung, criticized Lam’s government for failing to consult with local residents or the district council before implementing the plan, according to HKFP.

In Tin Shui Wai, hundreds of people took part in a march against the government plan, while shouting slogans like: “People of Tin Shui Wai resist.”

After the march, a group of people reportedly dumped trash cans on the local light rail tracks. Local media reported that riot police were called in, firing pepper-spray on a number of people at the scene, including journalists.

According to RTHK, police arrested a total of 33 people following the incident.

Meanwhile, in Tai Po, the Hong Kong’s Hospital Authority said in a statement on Saturday that there had been an act of vandalism against the Tai Po Jockey Club General Outpatient Clinic in the morning.

“The government didn’t listen to public demands of a complete border closure, and now they want to set up epidemic clinics in 18 districts,” Chan Mei-lin, a disenchanted resident in Tin Shui Wai, told Reuters on Saturday. “Doing that is like creating more wounds rather than trying to stop the bleeding.”

Follow Frank on Twitter: @HwaiDer
Go Back: China News
Previous: Another 70 People Test Positive for Coronavirus on Ship in Japan
Next: First Death Due to Coronavirus Reported in Taiwan
source : www.theepochtimes.com
''