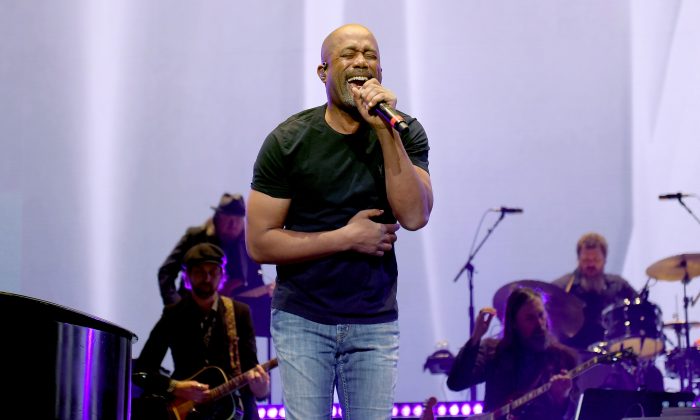 American country singer and lead vocalist of Hootie and the Blowfish, Darius Rucker, has raised more than $2 million for St. Jude Children’s Research Hospital in Tennessee.

Over the past decade, Rucker has continued to raise money for the organization with his annual “Darius & Friends” event.

This year’s total came to a record-breaking $425,000 for the event this week, bringing Rucker’s total raised to over $2 million.

The 53-year-old said he decided to start the event to fundraise for the hospital after he visited ten years ago and was moved by how its patients and their families are treated.

“I was struck on that first visit by how St. Jude not only cares for their patients, but also their patients’ families,” Rucker said in a statement on his website.

“They believe that a financial burden is the last thing a family should face when their focus needs to be on helping a kid get better, and St. Jude makes sure that their patients never pay a dime.

“It’s an honor for us to be able to help them continue such an important mission.”

St. Jude Children’s Research Hospital’s mission is to provide treatment to patients regardless of their race, religion, or their family’s financial situation, and mainly relies on funding from individual contributions and donors, according to its official website.

Children at the hospital, which was founded in 1962, are treated free of charge, and families never receive a bill for travel, housing, or food.

Country singer Darius Rucker raised $425,000 for St. Jude Children’s Research Hospital at his event in Nashville this past week, bringing his total raised for the organization over 10 years to $2 million.​ https://t.co/b4YWdTVCWz

This year’s “Darius & Friends” fundraising event took place at Ryman Auditorium Nashville on June 3, and Rucker’s sold-out concert was attended by over 2,400 people.

The country singer and songwriter started the night with a performance of his hit single, “Alright,” before continuing with chart-topper “For the First Time,” reported Music Mayhem Magazine.

The fundraising event was an unofficial kickoff to Nashville’s Country Music Awards festival, which began June 6 and ends June 9, and Jimmie Allen, Kane Brown, Luke Bryan, Sheryl Crow, Travis Denning, and Brett Young, were among the acts to make an appearance at Rucker’s benefit concert. Little Big Town and Charles Kelley also made surprise appearances at the event.

[email protected] is a leading light of country music’s support of St. Jude. His annual Darius and Friends benefit concert has raised more than $2 million, and this year’s 10th edition sold out even before the guest lineup was announced. #StJudeInspire https://t.co/pl5Wu6hOET

Before performing, nine-time GRAMMY Award winner Crow took to the stage and shared a story of a girl she met at a meet-and-greet event who was treated at the children’s hospital, Music Mayhem Magazine reported.

“I remembered her—she was missing her prom and she was 13. She had a rare form of cancer. She was cured at St. Jude and she’s now in her 30s,” Crow said.

“These are the stories that you guys make possible by showing up to these things… and just having the big hearts that you have, and of course we know that Darius has a big heart.”

The night came to a close with a “Wagon Wheel” singalong by Jimmie Allen, Kane Brown, Sheryl Crow, and Travis Denning.

10 years ago I visited @StJude and knew I wanted to do everything I could to help those kids and the amazing doctors who work tirelessly to find cures. Because of all of YOU, we’ve raised over 2 million dollars for them. Thank you. #DariusandFriends 🙏 https://t.co/gGhqFgtbIl pic.twitter.com/hQh1DXxUzs

“10 years ago I visited @StJude and knew I wanted to do everything I could to help those kids and the amazing doctors who work tirelessly to find cures. Because of all of YOU, we’ve raised over 2 million dollars for them. Thank you. #DariusandFriends,” Rucker tweeted about the milestone on June 6.

Last year, the country singer received the ACM Gary Haber Lifting Lives Award for his efforts and the Harry Chapin Memorial Humanitarian Award at the 2019 Music Biz Awards for his philanthropic work.