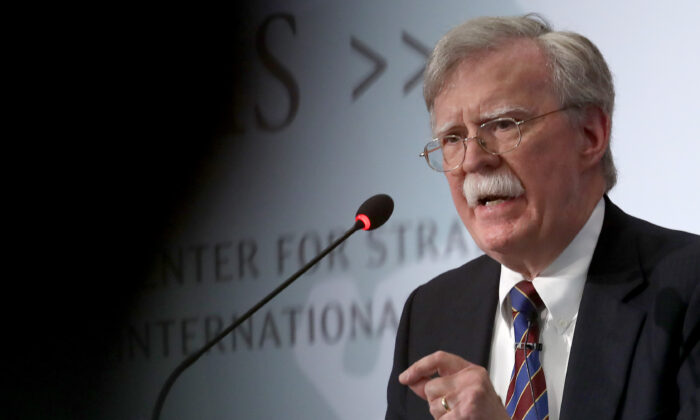 The House of Representatives could have called former National Security Adviser John Bolton to testify during its impeachment inquiry but did not, Sen. Joni Ernst (R-Iowa) said Monday after details of Bolton’s upcoming book leaked.

The House didn’t do its job and it’s not the Senate’s job to investigate, Ernst said during an appearance on the “Hugh Hewitt Show.”

“I have said time and time again, regardless of who the witness is, what the situation was, we need to get through phase one first,” Ernst said ahead of day two of arguments from President Donald Trump’s team, following three days of arguments from House impeachment managers.

The House “had every opportunity to subpoena these witnesses. They could have taken the time to go through the court system. They chose not to do that,” Ernst added.

“They want us to do the investigative work. And that’s not the job of the Senate. It is the job of the House to put together a solid record to send to the Senate for a review. They obviously did not do that, but we’ll, again, determine, after we’ve gone through the next several days what that next step will be, will we bring in witnesses or not.”

After details of Bolton’s book leaked on Sunday night, Democrats renewed calls for Bolton to be subpoenaed by the Senate to testify in the impeachment trial against Trump.

“It is increasingly apparent that it would be important to hear from John Bolton,” Romney told reporters.

Other Republicans said the book details didn’t mean Bolton should be called.

“After 2 weeks, it’s clear that Democrats have no case for impeachment. Sadly, my colleague @SenatorRomney wants to appease the left by calling witnesses who will slander the @realDonaldTrump during their 15 minutes of fame. The circus is over. It’s time to move on!” Sen. Kelly Loeffler (R-Ga.), who was sworn in on Jan. 6 to replace retired Sen. Johnny Isakson (R-Ga.), said in a statement on Twitter.

Sen. Lindsey Graham (R-S.C.) indicated a willingness to hear from Bolton but said that if Democrats get witnesses they want to hear from to testify, so should Trump.

“If there is a desire and decision by the Senate to call Democratic witnesses, then at a minimum the Senate should allow President @realDonaldTrump to call all relevant witnesses he has requested,” he said on Twitter.

Follow Zachary on Twitter: @zackstieber
2020-01-27T15:30:03-05:00
Go Back: US News
Previous: Ken Starr Warns Senate: We Are Living in ‘The Age of Impeachment’
Next: LAPD: Flights Were Grounded Due to Fog When Kobe Bryant’s Helicopter Crashed
source : www.theepochtimes.com
''