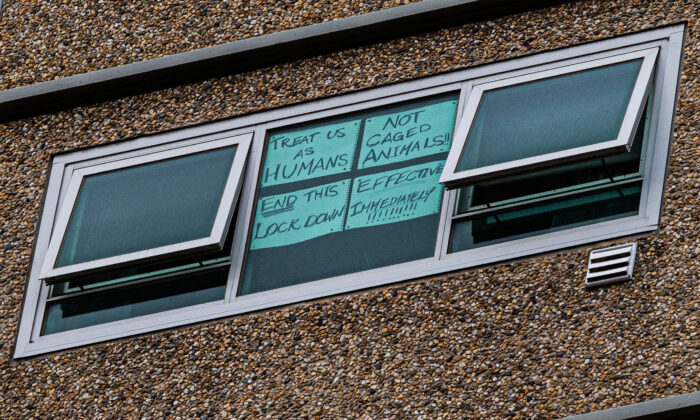 A sign is seen stuck to a window reading 'Treat us as humans not caged animals end this lockdown effective immediately' at the Flemington Public housing flats in Melbourne, Australia on July 05, 2020. (Asanka Ratnayake/Getty Images)
Updated: 2020-07-05 13:16:04

There were “frightening” scenes last night as swarms of police descended upon Flemington and North Melbourne housing estates under orders from Victoria’s Labor Premier Daniel Andrews to enforce a mandatory lockdown of the housing towers, King said.

The “drastic” move to stop the spread of the Chinese Communist Party (CCP) virus, commonly known as coronavirus was activated in response to data showing that 30 virus cases have been linked to the nine Melbourne housing blocks.

Speaking on the Today Show on July 5, King, who is also a local resident in the same suburb, said she would have preferred to see nurses, social workers, and members of the community on the front line but instead there was a lot of police.

“I do think however that dealing with this with lights and sirens [was a bit much]. You know last night looked at like a crime scene,” she said.

King raised no objection to the public health order or the need to contain the CCP virus.

“I think we have to prioritise saving lives, that’s really straightforward. This is a public health emergency first and foremost, but we have to be sensitive to the needs of every community and every person.

But she added, “It’s important that we protect people, but in the same way, in doing so, I think we shouldn’t treat them like criminals.”

“Some public housing tenants have fled war or family violence. Some are dealing with mental health challenges. Many don’t speak English as their first language. Many others work casual or insecure jobs.” King said in a statement on public housing lockdowns on July 4.

“This lockdown will scare many people, and trigger memories of past trauma.

“Being told you cannot leave your house, or seeing police on your doorstep, can be quite confronting. Being cut off from outside support services and family networks will also be damaging for many people,” King said.

Andrews said on Saturday that the restrictions have been brought in to safeguard the health of the residents and prevent a further outbreak of the CCP virus.

“This is not about punishment, this is about protection. We cannot have a cohort of people, many of whom in poor health to start with, we can’t have this virus spread. We have to do everything we can to contain the virus.”

“Staying in your unit is absolutely essential,” Andrews told a press conference.

Residents have been told to stay in their units for between five days and a fortnight. Around 500 police are on guard, with officers on each floor of the towers as well as monitoring the perimeter of the buildings.

Tenants in the towers have been granted a two-week reprieve from rental payments, and those who are unable to go to work because of the lockdown will get a A$1,500 hardship payment.

Andrews said public health workers, nurses, and other officials would be directly supporting the thousands of quarantined residents each day, who will be provided with food, essentials, drug and alcohol support, mental health support, family violence support, and physical healthcare.

“The community connector program, which is a partnership between the government and the Red Cross, will be a single point of contact for each and every one of those 3,000 residents,” Andrews said.

Victoria’s chief health officer Brett Sutton said that he expected more cases to be found. “I don’t think we’ve turned the corner yet. I think we can see other big days ahead of us,” he said.

The state’s deputy chief health officer Annaliese van Diemen added: “We are extremely concerned that there are many hundreds of people in these towers who have already been exposed to the cases that we’ve found and possibly to cases that exist and that we haven’t found.

“This is not just a matter of 23 to 30 odd people. This is a matter of many hundreds who have already been exposed and who may already be incubating.”

‘If We Get This Wrong, the Consequences Will Be Horrific’

The state government’s handling of the Melbourne hotel quarantine program has come under strong scrutiny recently with opposition ministers calling for their counterparts to step down.

Several outbreaks of the CCP virus have been linked to Melbourne hotels with security guards and close contacts infected.

There have been allegations of federal assistance being ignored, with private security guards favoured.

An inquiry into the state’s failed hotel quarantine program was launched on July 2.

King is urging the government to act “proportionately” in managing its hard lockdown of the Melbourne housing estates.

“We need to make sure these lockdowns are done right, done proportionately and done with sensitivity. If we get this wrong, the consequences will be horrific.” King said.

She has suggested that greater emphasis be spent on ensuring that all tenants are informed about what’s going, understand why it’s happening, and are given the support they need.

“That includes appropriate support for people with disabilities, chronic illnesses, and mental health challenges, [and more],” she said.