How to Get Some Emotional Distance in an Argument 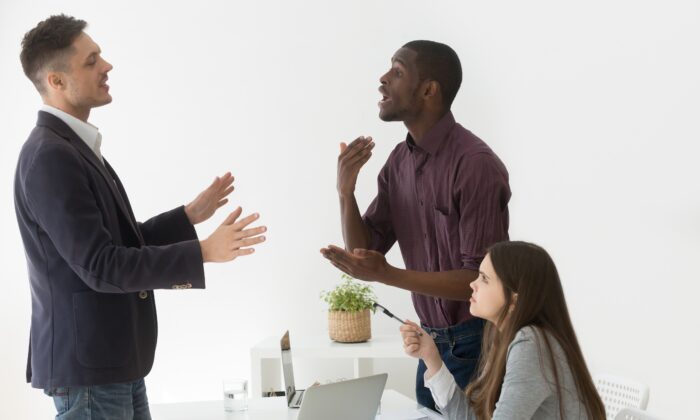 It's easy to get worked up in a conflict, but if you can take a step back and look at it from a less personal perspective, it help ease the emotional uproar. (fizkes/Shutterstock)
Updated: 2019-10-17 02:30:20

Your heart races. Your blood pressure soars. You can feel the adrenaline pumping.

Are you being attacked by a bear? No. You’re just arguing with your uncle on Facebook. The comments fly fast and furious.

In conflict situations, writes professional mediator Teresa Frisbie in a 2018 article, our bodies often react like we’re being physically threatened by a predator when in reality we might be having a disagreement about politics or the dishes or our favorite movie.

The roots of the confusion go back to our early history when danger came from every direction. But as human lives have grown more complex and multi-faceted, we still often default to very simplistic fight, flight, or freeze reactions during conflicts in our everyday lives. “The brain perceives social threat similarly to how it senses physical threat,” Frisbie writes.

And in these polarized times, we may encounter intense social threats when we glance at the news or scan our Facebook or Twitter feed—anytime we encounter someone voicing an opinion that challenges our identity and worldview. One response could be to disengage from those debates altogether, lest we get too worked up and flip our lid. That might help keep our blood pressure down, but it may also prevent us from understanding other points of view.

How does it work? The main trick involves shifting your perspective on a situation from the first person to the second- or third-person. For example, if your name is Bob, instead of asking, “Why do I feel this way?” you can instead ask, “Why does Bob feel this way?”

That might sound odd, but research suggests it can help you effectively regulate your emotions and keep your cool in challenging situations. There’s a reason we’re often better at giving advice to our friends and colleagues than to ourselves—our calmer emotional state and distance from the problem allows us to reason things through in a way that we often can’t when it’s personal. Managing your feelings can help you constructively respond to perceived threats and worries.

“The first prong of self-distancing is calming yourself down,” says Frisbie, who serves as director of the Dispute Resolution Program at Loyola University’s School of Law. This, in turn, can help calm your antagonists—which can open the door to resolving the conflict.

The Benefits of Getting Some Distance

University of Michigan psychologist Ethan Kross has studied the impact of self-distancing on reasoning, attitudes, and behaviors—and has found that all three can be enhanced by encouraging individuals to create psychological distance from their problems.

In one paper, originally published in 2011, Kross and co-researcher Igor Grossman used the backdrop of the Great Recession to examine whether self-distancing would improve the reasoning skills of college seniors and recent graduates facing a dire job market.

They specifically picked senior students and recent graduates who weren’t successful in obtaining a job post-graduation and asked them about how the recession would influence their future careers.

The participants were told to “take a few minutes to think about how the current economic climate will impact you personally,” and then were asked to explain how the recession would affect their careers from either an “immersed perspective”—such as imagining the “events unfolding before your own eyes as if you were right there”—or from a “distanced perspective,” which would involve imagining the “events unfolding as if you were a distant observer.”

The researchers then analyzed the participants’ responses and looked for intellectual humility and dialectical thinking, which recognizes that the world is constantly changing. Taken together, these two components form what the researchers dub “wise reasoning.” With wise reasoning, we are able to understand that our own narrow view of the world may have its own limitations and shortcomings.

What they found is that “participants in the distanced group were significantly more likely to recognize the limits of their knowledge … and recognize the future was likely to change.” They were more easily able to shift into wise reasoning that de-personalized the impact of the recession in a way that would allow them to attain a calmer emotional state.

Essentially, by engaging in self-distancing, the participants were better able to produce a mental state that allowed room for healthy optimism about their economic futures.

Kross and Grossman also performed a second study that has hopeful implications for those of us who get anxious about the state of politics in our country.

In the three weeks prior to the 2008 presidential election, researchers asked participants who identified as strong liberals or strong conservatives to “think about how various foreign and domestic issues would play out over the next four years if the candidate that they did not endorse wins the election,” from either a distanced perspective or an immersed perspective.

When dealing with “emotionally fueled” situations, says Kross, we tend to fall back on the default: fight, flight, or freeze. When that happens, we tend to see things only from our own point of view, and empathy becomes more difficult. “And so the theory is that getting people to take a step back and adopt a more detached, big-picture perspective could be helpful to people [in seeing] that it’s not just their own view that exists, that there are alternative viewpoints,” he says. “It can make people recognize the limits of their own understanding.”

It can be difficult to adopt a distanced perspective when you are facing an anxious situation, such as when you’re involved in a political argument or if you have just been laid off. But, as Kross’s research shows, doing so will help you engage in wiser reasoning that may help you be less anxious and pessimistic.

Frisbie emphasizes that we can all practice self-distancing without anyone even knowing. You don’t have to refer to yourself in the third person during a verbal dialogue with another person—changing your perspective in your inner monologue is more than enough to practice this skill. Self-distancing might sound weird, but, as Frisbie notes, “It’s invisible.” No one will hear you talk about yourself in the third person.

So, if you’re in a heated political argument, and someone tells you that you’re a heartless conservative or a loony liberal, pause and take a second before you respond. Give yourself some breathing room by reframing the situation with some self-distancing. Instead of asking himself, “How should I respond?” Bob can instead ask, “How should Bob respond to what was just said to him?”

Bob may be surprised how much of a difference it makes in slowing him down, calming his body, and allowing him to respond in a wiser and more thoughtful way.

Go Back: Life Style
Previous: The Road to Optimal Metabolic Health
Next: Woman Dies From Rare Amoeba in Her Brain After Using Neti Pot With Tap Water
source : www.theepochtimes.com
''