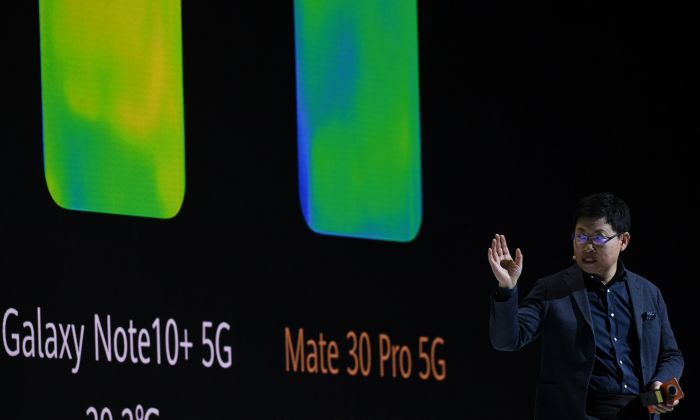 Huawei’s latest smartphone series, the Mate 30, will be the first ones it makes without Google apps installed.

Since the Chinese tech giant was sanctioned by the U.S. government in May and prohibited from buying U.S. tech supplies and software, it has lost access to Google’s proprietary products, including the Google-developed Android operating system and popular apps such as Gmail, Google Play Store, and Google Maps.

Some location-based apps that rely on Google Maps, such as ride-hailing and food delivery apps, won’t be able to function on the new Huawei phones.

At a launch event in Munich, Germany on Sept. 19, Richard Yu Chengdong, head of Huawei’s consumer business division, introduced the series, which will have four models: the Mate 30, Mate 30 Pro, Mate 30 Pro 5G and Mate 30 RS.

The smartphones’ operating systems are based on Android open source, but won’t have Google services or apps.

The phones are pre-installed with Huawei’s own web browser to replace Google Chrome. They will have AppGallery, a Huawei-designed app distribution platform with roughly 45,000 apps available.

By comparison, the Google Play Store has about 2.7 million apps. Yu told reporters after the launch that Huawei will spend $1 billion to encourage global developers to make apps compatible with its AppGallery. Prior to the U.S. sanctions, AppGallery was primarily used in Huawei phones for the Chinese market, where Google and many Western tech brands are banned.

Yu did not reveal which regions the new phones will be available for sale. But European media said given the lack of accessibility to Google products, the phones are unlikely to sell in Europe.

The Mate 30 design is competitive with Apple’s latest iPhone 11 and iPhone 11 Pro, with its three rear camera lens; Samsung’s triple-camera Galaxy Note 10; and the upcoming Google Pixel 4, which will be launched on Oct. 15.

The Mate 30 Pro has four rear camera lens, including an ultra-wide lens, telephoto lens, and a 3D depth-sensing lens.

Due to U.S. sanctions, Huawei also cannot purchase U.S.-made electronic chips. The Mate 30 series will use Huawei’s own design, the Kirin 990 chipset.

Dutch media LetsGoDigital quoted a Huawei insider on Sept. 19, who revealed that Huawei does not plan to sell the new series in central Europe.

“Huawei realizes that launching an expensive high-end smartphone without Google apps in Europe is practically useless,” the insider said.

The report pointed out that during the pre-event session in Munich, the Chinese company did not provide information about the new phone, a “strange” incident that made journalists there “confused and upset.”

“I don’t think [telecom] operators will risk having millions of disappointed customers that rely on Google services [who] see it doesn’t work on their brand new devices,” she said.

Huawei was the world’s second largest smartphone supplier in 2018. The company’s founder and CEO Ren Zhengfei has said before that the company had ambitions to become the world’s number one smartphone maker by 2020.

But the U.S. sanctions has put a damper on its plans.

Shortly after the U.S. administration announced its export ban on national security grounds, a number of mobile carriers announced that it would discontinue selling Huawei smartphone models, including EE, the UK’s largest mobile operator, and UK-based mobile carrier, Vodafone.

Chunghwa Telecom, the largest telecom company in Taiwan, also announced that it would not purchase any more new Huawei phones because “the future maintenance and repair can’t be guaranteed.”

In current trade war negotiations, Beijing is seeking an easing of the U.S. sanctions on Huawei, but it is unclear whether the U.S. side will cut such a deal.