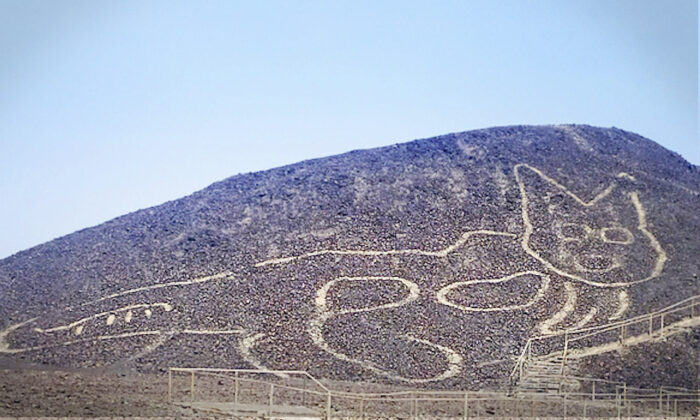 The depiction of what appears to be a reclining feline has been discovered carved into the side of a hill in southern Peru’s Nazca Desert. The drawing is thought to be over 2,000 years old.

The cat was discovered while planning for a new path to an observation platform at the Nazca Lines UNESCO World Heritage site, reports the BBC, which would allow visitors to view the site’s numerous ancient geoglyphs (ground drawings).

Archeologists believe that the 120-foot-long cat was drawn, as the others were, by creating depressions in the desert topsoil, exposing the lighter-colored bedrock underneath.

The individual lines of the cat drawing vary in width from 30 to 40 centimetres.

“The figure was scarcely visible and was about to disappear, because it’s situated on quite a steep slope that’s prone to the effects of natural erosion,” Peru’s Culture Ministry explained in a statement.

The Nazca Lines cover 175 square miles of Peru’s coastal desert landscape, and the Nazca culture rendered most of its geoglyphs between 200 and 700 AD. Johny Isla, Peru’s chief archeologist for this site, explained to Efe news agency that the cat is even older than those; it is likely one of over 100 recently discovered geoglyphs rendered in the late Paracas era, between 500 BC and 200 AD.

“We know that from comparing iconographies,” said Isla. “Paracas textiles, for example, show birds, cats, and people that are easily comparable to these geoglyphs … It’s quite striking that we’re still finding new figures, but we also know that there are more to be found.”

Other geoglyphs in the deserts of southern Peru depict animals, birds, plants, and other shapes and patterns, according to CNN. UNESCO added the Nazca Lines to its World Heritage List in 1994, hailing the geoglyphs as one of “archeology’s greatest enigmas.”

Drones have made recent discoveries possible; many figures are so large that they can only be deciphered from an aerial perspective. Peruvian archeologist Toribio Mejia Xesspe discovered the first preserved geoglyphs in the 1920s, and researchers from Japan’s Yamagata University identified over 140 of them with the aid of 3D imaging in 2019.

Experts believe that the figures were used in ritual ceremonies. Some may have served as messages to the gods.

Since Oct. 13, the “relaxing cat” has been cleaned for preservation, and photos have been shared with media to celebrate this stunning addition to the desert’s collection.

We would love to hear your stories! You can share them with us at [email protected]

Go Back: Science
Previous: 'Dark Archives' Explores The Use Of Human Skin In Bookbinding
Next: From Air Travel to Hospital Treatment, We're Still Learning About The Virus
source : www.theepochtimes.com
''

Why COVID-19 Infects Some Animals, But Not Others Suggested by 3D Protein Modeling

Gaia: Most Accurate Data Ever for Nearly Two Billion Stars

How Airflow Inside a Car May Affect COVID-19 Transmission Ris
Although Thousands of Election Fraud Whistleblowers Are Coming Forward -- Why Aren't There More?