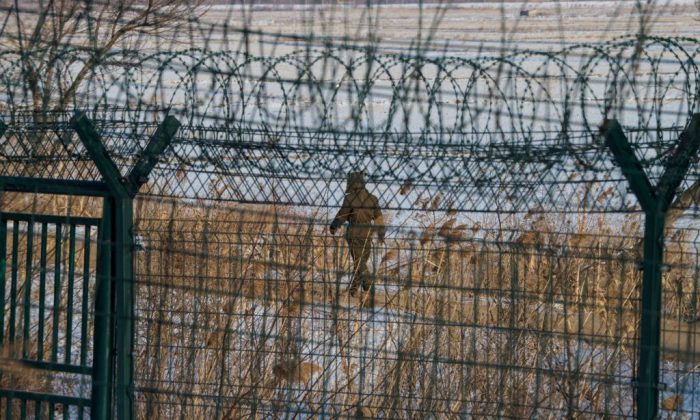 Seven North Koreans were recently caught and detained in China while attempting to escape across the border.

“China should not send these seven people back to North Korea where they face torture, sexual violence, forced labor, and other horrors,” said Phil Robertson, deputy director of the Asia division at Human Rights Watch (HRW), according to a May 14 announcement by the New York-based rights organization.

Robertson added: “Beijing should immediately allow them to travel to a third country.”

The seven North Korean escapees, including a pre-teen girl, were detained by Chinese authorities in northern China’s Liaoning Province on April 28.

South Korean media reported on the status of the seven North Koreans on April 29, after South Korean-based human rights advocacy group Justice for North Korea issued a statement saying that the seven were arrested while in a hideout, outside of the Liaoning capital of Shenyang City.

The group identified the pre-teen girl by her last name, Choi, who along with her uncle surnamed Kang, crossed the China-North Korea border in early April.

News of their detention was revealed after Choi’s mother, who lives in South Korea, contacted the South Korean consulate in Shenyang upon losing contact with her daughter during the weekend prior to April 29.

Peter Jung, founder of Justice for North Korea, while speaking to Radio Free Asia (RFA), said that Choi’s mother also visited South Korea’s Ministry of Foreign Affairs and the Office of the United Nations High Commissioner for Human Rights in South Korea, in an attempt to save her daughter.

According to an April 30 article by South Korea’s English-language newspaper The Korean Times, the South Korean foreign ministry stated that it took “all possible measures” and “necessary action” after receiving news of the case. The ministry added that it could not elaborate on details due to safety concerns for the seven.

“China should end its complicity with North Korean rights violations by ending the practice of forcing back fleeing North Koreans,” Robertson said, adding that it is an international obligation to do so.

HRW pointed out that in 2010, Pyongyang adopted a decree making defections a crime of “treachery against the nation,” which is punishable by death. If not executed upon their return, escapees are often punished by being sent to either a political prison camp or an ordinary prison camp.

The conditions inside North Korean political prisons are brutal, with many detainees facing starvation, no medical care, lack of shelter and clothes, and sexual assault and torture by guards, according to HRW.

An unnamed former senior official at North Korea’s secret police force told HRW that officials under his command “tortured every returnee to find out where they went in China, whom they contacted, and what they had done while outside North Korea.”

Chinese authorities often label North Koreans in China as “illegal economic migrants” and have repatriated them back to North Korea under a 1986 bilateral border protocol that calls for Chinese police to collaborate with their North Korean counterparts to track down escapees.

Some North Koreans have taken their lives after being arrested, choosing to die than face harsh punishment in North Korea.

In July 2017, RFA reported that an unnamed former North Korean official, along with about 10 other North Korean defectors, was caught by Chinese police at southern China’s Yunnan Province. They were taken north to Shenyang, waiting to be sent back to North Korea. While being held, the official, his wife, and his three children committed suicide by taking poison.

In December that same year, RFA reported that an unnamed North Korean nuclear scientist was among a group of defectors detained in Shenyang a month earlier and then repatriated. An RFA source, speaking on condition of anonymity, stated that the scientist killed himself by taking poison while confined at a state security cell in the North Korean city of Sinuiju, before he could be questioned.