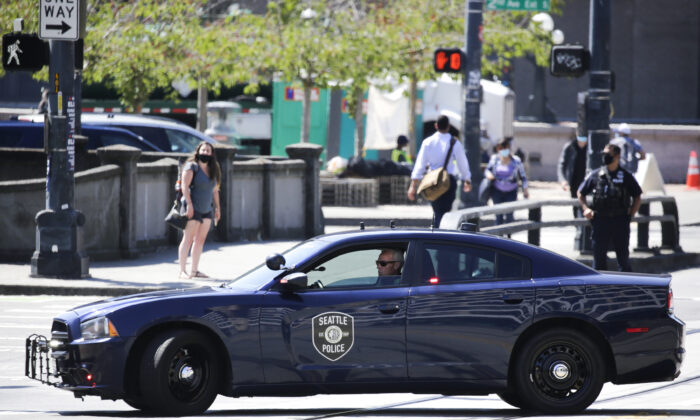 Hundreds of people attended a “back the blue” rally in Seattle on Sunday, voicing their opposition to efforts to defund the city’s police department. The City Council is scheduled to vote on approving cuts to the police on Monday.

The crowd, many of whom wore blue, chanted “SPD” and “back the blue.” The rally was arranged by the Seattle Police Officers Guild, a police union.

Backers said they don’t want cuts to the Seattle Police Department, or SPD.

“Just because we need more social programs does not mean we need to defund the SPD. We can have both. We can fund the SPD, fund crime protection, and fund law enforcement,” one woman told KOMO News.

John Balph, a retired X-ray technician, said Black Lives Matter is a “worthy movement” and reforms are needed, but the decline of public safety in the city worries him.

“Is this the city the Council wants to represent, a deserted city?” Balph told the Seattle Times. “It’s not the Seattle I want to live in. But average citizens can’t do anything about it. It’s very frustrating.”

Counter-demonstrators gathered across the street. The sides were separated by barriers.

Funds drawn from the police force should be reallocated to trained social workers and others, David Lewis, one of the counter-protesters, told KOMO.

“This isn’t saying abolish the police altogether, this is saying put the funds in to the organizations that actually decrease the crime that we have here. If you increase education and housing and welfare in these neighborhoods, we won’t have as much crime,” he said.

After two counter-protesters waded into the pro-police crowd, they were removed.

Police officers said the removal came because the women were trying to cause an altercation.

In a social media statement after the rally, Mike Solan, the police union’s president, said he was “truly humbled & yet not surprised” by what he described as the ignored majority coming out to show their support for the police.

The City Council is scheduled on Monday to vote on the city’s budget for the rest of the year. Council members last week approved cutting millions from the Seattle Police Department but rejected efforts by Councilwoman Kshama Sawant, a socialist, to cut the department’s budget by 50 percent.

Seattle Mayor Jenny Durkan and Police Chief Carmen Best have united on opposing deep cuts to the department, arguing it would cripple the police force and lead to a delay in response times.

Cuts to patrol officers “will lead to significant layoffs, closure of precincts, including the Southwest Precinct, and slower response times,” she said.

Maria Lorena González, the council’s president, said in a briefing last week that police would be at fault if they couldn’t respond to crimes.

“Instead of buying bullets, violence, and intimidation, we are choosing—the City Council is choosing—to invest in peace and restoration of communities that have been ravaged by generations of racism,” she said.

Some officers will be terminated because of the cuts, the council president confirmed. Councilwoman Lisa Herbold asserted that officers are used too broadly, pushing for unarmed city workers to respond to some 911 calls.

“We are asking police officers to do too much, and in doing so we make our communities less safe,” she said.

Council members are all Democrats except for Sawant. The council is following some of the plans laid out by Decriminalize Seattle and King County Equity Now Proposals, two groups pushing for deep cuts to the police.

The Seattle Police Officers Guild, a police union, said on Saturday that its petition against defunding the police has now been signed by over 160,000 people.

On the petition website, the union accuses the City Council of “having no specific plan” and said cutting funding will lead to “immensely longer 911 response times and of course, higher crime rates.”