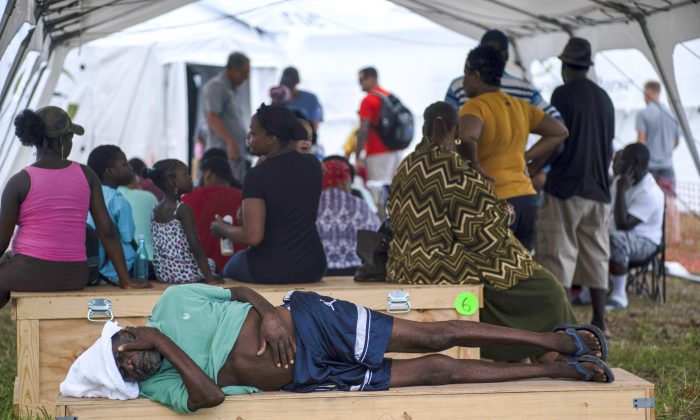 An man rests at a tent-hospital set up by Samaritan's Purse in the aftermath of Hurricane Dorian in Freeport, Bahamas, on Sept. 10, 2019. (Ramon Espinosa/AP)

Thousands of hurricane survivors are filing off boats and planes in Nassau, the capital of the Bahamas, facing the prospect of starting their lives over, but with little idea of how or where to even begin.

A week after Hurricane Dorian laid waste to their homes, some sat in hotel lobbies as they tried to figure out their next step. Others were taken by bus to shelters jammed to capacity. Some got rides from friends or family who offered a temporary place to stay.

“No one deserves to go through this,” 30-year-old Dimple Lightbourne said, blinking away tears.

Dorian devastated the Bahamas’ Abaco and Grand Bahama islands, leaving at least 50 dead, with the toll certain to rise as the search for bodies goes on.

Lightbourne’s mother, Carla Ferguson, a 51-year-old resident of Treasure Cay, walked out of a small airport in Nassau with her daughter and other relatives in the late afternoon on Sept. 9 and looked around as the sun set.

Ferguson and her family had one large duffel bag and three plastic storage boxes, most of them stuffed with donated clothes they received before leaving their tiny, devastated island.

The government has estimated that up to 10,000 people from the Abaco islands alone, including Treasure Cay, will need food, water, and temporary housing. Officials are considering setting up tent or container cities while they clear the country’s ravaged northern region of debris so people can eventually return.

Getting back to Abaco is the dream of Betty Edmond, a 43-year-old cook who picked at some fries with her son and husband in a restaurant at a Nassau hotel, where her nephew is paying for their stay.

They arrived in Nassau on the night of Sept. 7, after a six-hour boat trip from Abaco, and they plan to fly to Florida on Sept. 11, thanks to plane tickets bought by friends who will provide them a temporary home until they can find jobs. But the goal is to return, Edmond said.

“Home will always be home,” she said. “Every day, you wish you could go back.”

“You try to keep your hopes up, but…” her voice trailed off as she shook her head.

The upheaval, however, was exciting to her 8-year-old son, Kayden Monestime, who said he was looking forward to going to a mall, McDonald’s, and Foot Locker.

Instead of starting school Sept. 10, as was scheduled before the Category 5 storm hit, Kayden spent the day accompanying his parents to the bank and a shelter as they prepared for the move to the United States.

Also flying to Florida was 41-year-old Shaneka Russell, who owned Smacky’s Takeaway, a takeout restaurant known for its cracked conch. The restaurant, named after the noises her son made as a baby, was destroyed by Dorian.

Russell said good Samaritans had taken her and a group of people into their home over the weekend and found them a hotel room in Nassau for a couple of days.

Saskatoon Protest Springs Up, Even After Trudeau Orders Blockades Torn Down

US senator: China is carefully managing information about coronavirus