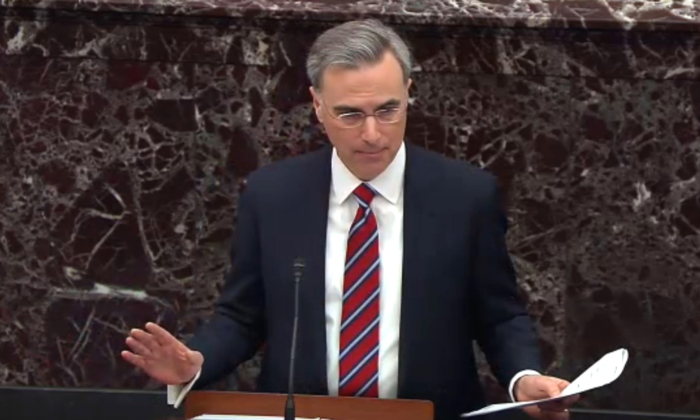 In this screengrab taken from a Senate Television webcast, White House counsel Pat Cipollone speaks during impeachment proceedings against U.S. President Donald Trump in the Senate at the U.S. Capitol in Washington on Jan. 25, 2020. (Senate Television via Getty Images)

The impeachment trial of President Donald Trump starts again on Monday, with Trump’s legal counsel offering arguments for why the president should not be impeached. Refresh for updates.

“The reports about John Bolton’s book strengthen the case for witnesses and have prompted a number of conversations among my colleagues,” Collins said in a statement.

Details of Bolton’s book were leaked to several news outlets on Sunday evening. Trump, meanwhile, said on Monday that alleged details offered in the forthcoming book by Bolton, who was Trump’s national security adviser until he departed late last year, were false—namely, the alleged claim that Trump linked hundreds of millions of dollars to investigations in Ukraine.

Collins added that she has “always said” that she would likely vote to call witnesses in the trial “just as I did in the 1999” impeachment trial of President Bill Clinton.

“I’ve said that in fairness to both parties, the decision on whether or not to call witnesses should be made after both the House managers and the president’s attorneys have had the opportunity to present their cases,” she said.

Romney, considered another possible swing-vote who has been an outspoken critic of Trump within the GOP, told reporters Monday that “it is increasingly apparent that it would be important to hear from John Bolton” before adding that it is “increasingly likely” other Republican senators would join in too.

“This is stunning. It goes right to the heart of the charges against the president,” Schumer told reporters. “Ambassador Bolton essentially confirms the president committed the offenses charged in the first article of impeachment.”

Trump, meanwhile, has denied allegations in the book on Twitter.

“I NEVER told John Bolton that the aid to Ukraine was tied to investigations into Democrats, including the Bidens. In fact, he never complained about this at the time of his very public termination. If John Bolton said this, it was only to sell a book,” he wrote on Twitter.

2020-01-27T13:10:02-05:00
Go Back: US News
Previous: Collins, Romney Say Bolton Reports Strengthen Case for Impeachment Witnesses
Next: US senators say that hiring Huawei is like working with the KGB
source : www.theepochtimes.com
''