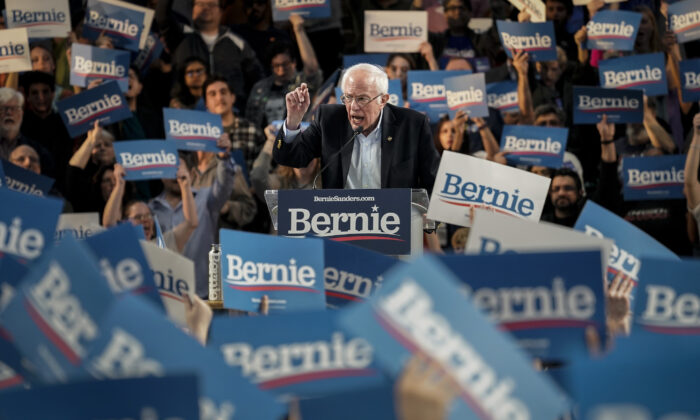 All eyes will be on Bernie Sanders, Orange County, and two particular congressional districts as voters head to the polls March 3 to vote in California’s presidential primary elections, political analysts say.

Though they differ in their perspectives on many issues, California-based political analysts Dr. Tony Quinn and Dr. Sherry Bebitch Jeffe can agree on one thing: barring any major upsets, Sanders will likely win the Democratic primary in California.

A Public Policy Institute of California (PPIC) survey released Feb. 20 shows Sanders with 32 percent of the vote among likely Democratic voters in the state, followed by Joe Biden with 14 percent, Elizabeth Warren with 13 percent, Michael Bloomberg with 12 percent, and Pete Buttigieg with 12 percent. Eight percent of voters are undecided, and no other candidate has more than five percent.

Several other recent political polls show Sanders leading the California Democratic race, but with about 24 percent of the vote—not 32. Nationally, recent general election polls show Sanders slightly ahead of President Donald Trump. Sanders was named the candidate most likely to defeat Trump by 34 percent of voters in the PPIC survey.

Sanders is also gaining traction among Latino and black voters in the state, said Jeffe, a retired Professor of the Practice of Public Policy Communication at the Sol Price School of Public Policy, University of Southern California.

“I think he’s taken a lot of that [support] from Biden, and that’s important. But, the younger voters have always basically been Bernie’s. It’s ideological. It’s change. His ideology is far more revolutionary, shall we say. And again, he’s got an operation here. He’s got a presence here that other candidates don’t,” she said.

“The Democratic Party itself has changed and the activists are more and more political,” Jeffe said. “He has an incredible organization. He could hit the ground running because he still had that organization from 2016. It was not surprising that he is ahead … Bernie has been here and his ‘movement’ has sustained over the last four years.”

While Quinn agreed Sanders has the best chance of winning in California, he said Sanders still has a long way to go nationally. He has to win enough delegates in more than a dozen other states to win the nomination. And, even then, he has to defeat Trump to become president.

“He got 46 percent against [Hillary] Clinton [in 2016]. He has a strong following and it’s not unlike Trump, who had a strong following when he first started out. So, it may very well be that Bernie is impossible to stop and it could very well be that he gets the lion’s share of delegates on Super Tuesday,” said Quinn, senior editor at California Target Book. “But having Bernie as a nominee is going to be really hard for the Democrats. He is very far left, you know.”

The top concern on the minds of most Democratic primary voters is choosing a candidate who can beat President Donald Trump in the Nov. 3 general election, Jeffe said. And, their second priority is making sure they defeat any Republican candidates who support Trump.

In the Feb. 25 Democratic debate, Sanders came under fire from other candidates for his self-declared socialist agenda.

Though Sanders proudly bills himself as a ‘democratic socialist,’ Jeffe said the term socialism no longer has the same negative connotation it did during the Cold War.

The Nordic countries do not have the same government controls characteristic of socialism—rather they have private market economies with high taxes to pay for government services.

He says socialism means the same thing it always has, and that the 2020 presidential race is all about socialism.

“Nobody knows what socialism means, but traditionally it has meant control of all aspects of government by a group of reliable bureaucrats,” Quinn said. “In the Soviet Union, they were called nomenklatura, and these are the bureaucrats who made all the decisions and the five-year plans. There was no private property, no private ownership of anything. That’s what socialism is, and to pretend that it’s something else is kind of denying what history tells us.”

On the other hand, even though California is a decidedly blue, one-party state, the rest of America has no intention of electing a socialist to the White House, Quinn said.

“There is no sign that the people of California want a socialist government, but there is a sign a lot of people here like Bernie Sanders because he picks on the establishment,” he said.

Hotbed on the Hustings

The most highly contested races this election season are mostly in Orange County, a typically red county that flipped to blue in 2018. Republicans lost six seats to Democratic contenders:

Rob Pyers, research director at California Target Book, said via email that Republicans are fighting hard to claw back these seats from Democrats in 2020.

In District 39, Young Kim is running against Gil Cisneros again. “She’s benefited this time around from virtually no competition, which has enabled her to outraise Cisneros in a few reporting quarters,” Pyers said.

In District 45, “There are a number of Republican candidates trying to unseat Katie Porter, but the fractured field has left things scrambled,” Pyers said. “There is no clear Republican frontrunner, and the candidates are burning through whatever cash they’re raising to try to make it out of the primary. Meanwhile, Porter has been a consistently strong fundraiser and has over $3 million on hand.”

The District 48, Pyers said, “is becoming bluer, but it still has a strong conservative lean, and Democrats were able to capitalize on running against Dana Rohrabacher in 2018. This time around, the GOP has lined up behind Orange County Supervisor Michelle Park Steel. She’s well-funded and looks poised to give [Harley] Rouda a serious challenge.”

In District 49, “Mike Levin has been raising money at a brisk clip. The Republican in the race has been able to self-fund to a certain extent, but I’m not expecting him to be able to mount a competitive effort,” Pyers said.

In District 74, “There are two Republicans running against Cottie Petrie Norris. The most formidable appears to be Newport Beach Mayor Diane Dixon,” Pyers said.

“While Republicans are trying to claw back these seats, Orange County Republican incumbents in AD55, AD68, AD72, AD73, and SD37 are all going to have targets on their backs, and it’s not impossible to think that Democrats could gain even more ground in the Legislature in 2020,” Pyers said.

Two other races to watch are the 25th and 50th congressional districts.

The District 25 seat was left vacant by Democrat Katie Hill, who resigned last November after reports of alleged sexual misconduct.

She was accused of sexual indiscretions with a congressional staffer and also admitted to a relationship with a campaign aide in what has been described in the news media as a “throuple” relationship. Later, nude photos of Hill were published by a political blog, RedState, and the Daily Mail, a British tabloid. Hill served in Congress for less than a year, from Jan. 3–Nov. 3, 2019.

In District 50, former U.S. Rep. Duncan Hunter resigned his congressional seat after he and his wife, Margaret, pleaded guilty to corruption for using campaign funds for personal expenses.

Federal prosecutors alleged that from 2009 to 2016, he spent campaign funds on extramarital affairs with five women, including lobbyists and congressional staff. Hunter resigned Jan. 13 after serving in Congress from 2009–2020.

Democrats have next to no chance of winning in the 50th District, Quinn said. It is the reddest district in the state, which Trump carried with a 58 percent majority in 2016.

“It’s between two guys trying to be the most Trumpy,” he said, referring to Issa and Jones.

This district, numbered as California’s 52nd congressional district from 2009–2013, covers much of North San Diego County and part of Riverside County. It includes the cities of El Cajon, Escondido, San Marcos, Santee, and Temecula.

“The main issue is there are no issues,” mainly because the primaries are being held three months earlier than usual, Quinn said.

Only about 20 percent of the early ballots have been returned by mail, he added. Neither of California’s two U.S. Senators—Diane Feinstein and Kamala Harris, both Democrats—are up for election and no statewide offices are up for grabs.

“So, all we have are congressional and legislative races. Basically, the only congressional races are Republicans trying to come up with candidates to take on the seven Democrats who were elected last time to Republican seats,” said Quinn. “Two years ago, I saw lots of yard signs for candidates. There seemed to be a lot of interest. That seems to be lacking right now. Nobody is really following it. The coverage has been very sparse.”

In California, the homelessness crisis will most likely be on the minds of voters, especially after California Gov. Gavin Newsom’s State of the State Address on Feb. 19 in which he focused heavily on homelessness, lack of affordable housing, substance abuse, and mental illness.

More than half of the electorate in Orange County believes homelessness is a significant problem, said Jeffe.

Sixty-three percent of Californians say housing affordability is a big problem in their part of the state, and another 25 percent say it’s somewhat of a problem, the PPIC survey found. About four in ten Californians (44 percent of adults and 38 percent of likely voters) say the cost of living is making them seriously consider moving elsewhere in California or out of state.

“The lack of jobs at the lower end of the economy is part of the problem,” Jeffe said. “You’re seeing more families, more people from the middle class who have been fired or laid off living in vans, living in cars … I don’t remember it ever being so visible.”

“We don’t have the good blue-collar jobs anymore that gave people a start in life, that allowed them to get a nice house at a reasonable price. That’s all disappeared in California,” Quinn said

With the electorate so focused on Trump and the presidential race, health care almost seems to have slipped off the radar, Jeffe said.

Although Quinn agrees that healthcare is not a major election issue in California, he said it should be.

“Obamacare has worked relatively well for California, which is why it’s just crazy to see all these Democrats trashing it,” Quinn said. “I mean, it took 10 years to get Covered California going. It’s an insurance plan. That’s all Obamacare ever was: an insurance plan subsidized by the state. But, it does seem to work, and it does seem to provide healthcare choice. The fact that Sanders and Warren want to throw the whole thing out, I think, is crazy.”
Although many middle-class Americans aren’t happy about the high costs of prescription drugs and soaring health insurance premiums, they’re not ready to dump their employer-based healthcare systems, he said.

Proposition 13, known as the School Facilities Bond, is the only ballot measure on the primary election ballot. A Yes vote, supported by Governor Gavin Newsom, would approve a $15 billion state bond program to finance construction and modernization updates for educational facilities.

There’s some confusion around it because it has the same designation as another Proposition 13, which capped increases on residential and commercial property taxes in 1978. “The original Prop. 13, I call the ‘real’ Prop. 13,” Jeffe said. Repealing the “real” one will be on the Nov. 3 ballot.

Meanwhile, last-minute legislation that Newsom signed into law on Feb. 13 could boost independent votes in the Democratic primary.

Senate Bill 207, authored by Sen. Melissa Hurtado (D-Sanger), allows voters to submit a signed written request to county election officials to change their political party preference or address within 14 days of an election until the close of polls on Election Day. The registration of the voter will be immediately updated and voters will receive a ballot or provisional ballot.