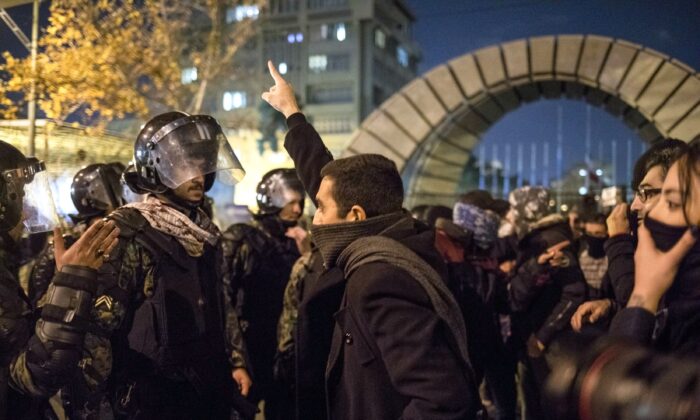 An Iranian man confronts riot police during a demonstration outside Tehran's Amir Kabir University on Jan. 11, 2020, after Iran admitted to having shot down a Ukrainian passenger jet by mistake on Jan. 8, killing all 176 people on board. (-/AFP via Getty Images)
Updated: 2020-04-09 19:16:06

It was back in 2012 that Canada closed its embassy in Tehran and suspended all relations due to concerns about terrorism and the safety of Canadian diplomats, Iran’s support for Syria, and its threats against Israel. The Iranian embassy in Ottawa was subsequently closed.

Lobby groups for the Iranian regime on Canadian soil have long pushed for the re-establishment of bilateral relations and the re-opening of embassies in Tehran and Ottawa. And in January of this year, shortly after the downing of Ukraine International Airlines Flight 752 by the Islamic Revolutionary Guard Corps, Iran proposed resuming some diplomatic ties.

But there continues to be strong opposition to such a move in Canada, not only from the Conservative Party—which severed diplomatic ties in 2012—but also from many in the Liberal Party. During the 2015 federal election campaign, the Liberals pledged to resume relations with Iran if elected, but put the idea on hold in June 2018 when all Liberal MPs voted in favour of a Conservative motion to cease negotiations on re-engagement efforts.

“The shooting down of the Ukraine International flight is not the only time Iran has killed Canadians,” Kaveh Sharooz, senior fellow with the Macdonald-Laurier Institute and one of Canada’s leading experts on Iran, said in an interview.

While the majority of the Iranian diaspora in Canada is against the current regime in Iran under Supreme Leader Ayatollah Ali Khamenei, Sharooz says a number of groups have sprung up in Canada and other countries in recent years “to act as the Iranian government’s apologists in the West.”

“In Canada, for example, the positions taken by the Iranian Canadian Congress are virtually indistinguishable from those taken by Iran’s foreign ministry,” he said.

“Because of legal non-compliance, the ICC has been forced in recent months to reveal its membership list, which shows it represents minuscule numbers of people. So it’s disheartening to hear about them in media or cited positively by some politicians.”

Sharooz adds that these groups say they are “pro-peace” when in reality they support the military endeavours of the regime.

“They never object when it’s Iran’s regime waging war in places like Syria. In those cases, they are in favour of Iranian military adventurism. It’s only when the Iranian regime is pressured that they put on ‘pro-peace’ rallies. Their defence of the Iranian regime is very transparent,” he says.

At one point after Stephen Harper’s Conservative government closed the Canadian embassy in Tehran and expelled Iranian diplomats, there was talk of opening an “interests section” in Ottawa to provide essential consular services. Currently, Canadians must travel to the Pakistani Embassy Washington, D.C., to avail of such services.

But according to Avideh Motmaen-Far, president of the Council of Iranian Canadians, Iran rejected that idea because it has been holding out for an embassy here with full diplomatic relations.

“When Canada closed the Iranian embassy, they offered to open an interests section but the Iranian regime refused,” he said. “The regime and their lobby here in Canada have been promoting the reopening the embassy under the pretext that would be easier to have talks and intervene Canadians got imprisoned or had any trouble in Iran.”

But the regime may have come to the conclusion that an interests section would be better than nothing—even if not located in Canada.

According to a recent article in the Globe and Mail, Iranian Foreign Minister Mohammad Javad Zarif made an overture to renew diplomatic ties during a face-to-face meeting with Foreign Affairs Minister François-Philippe Champagne in Oman on Jan. 17.

A source told the Globe that while Zarif didn’t mention immediately reopening an embassy in Ottawa, he proposed opening interests sections in embassies of third countries as a small first step. Although “Champagne didn’t reject the idea, he did not entertain discussion of it either,” given that the federal government’s priority at the time was matters regarding the downing of Flight 752, the article said.

Commercial relations between Canada and Iran expanded rapidly during the 1990s, and Iran became one of Canada’s most important trading partners in the Middle East region.

Motmaen-Far notes, however, that relations between the two countries declined dramatically after the killing of Zahra Kazemi, an Iranian-Canadian photojournalist who was arrested for taking pictures of protesters outside Iran’s notorious Evin prison and was subsequently detained and tortured to death.

“Keeping the Islamic Republic’s embassy closed in Ottawa is extremely important,” he said, adding that diplomacy only works with a government that “knows and respects the diplomacy language” and the Iranian regime does not.

“Plus, not having our diplomats in a country that can take them hostage whenever they desire would be a good thing. They have done that before to American diplomats. Even recently, they arrested the British diplomat (Rob Macaire) in the streets of Tehran and burned his pictures all over the city,” he said.