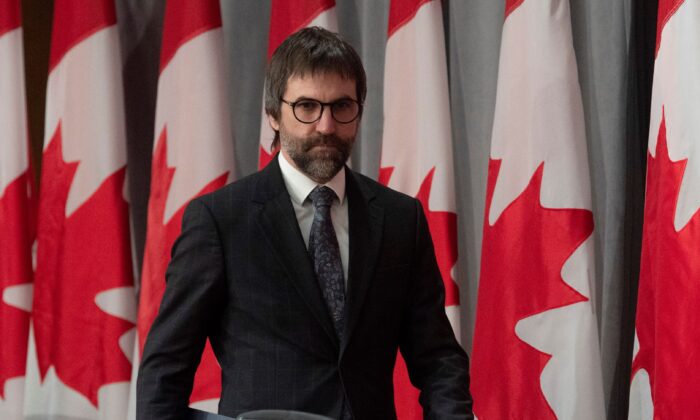 A slew of measures introduced by the federal government to control online content creates a framework that could be used for censorship, critics warn.

Recommendations in a June 2019 report by the Liberal-dominated justice and human rights standing committee titled “Taking Action to End Online Hate” included “a national database to retain and analyze hate crime and hate incident data.” The report also recommended a “civil remedy,” such as putting hate speech back in the domain of human rights tribunals.

And Heritage Minister Steven Guilbeault has stated that stronger regulation is coming.

“We have free speech in our society, but people can’t say everything. You can’t verbally abuse someone.”

Bill C-10, introduced by Guilbeault on Nov. 3, places “online undertakings” under the Broadcast Act and says programming should “serve the needs and interests of all Canadians—including Canadians … of diverse ethnocultural backgrounds, socio-economic statuses, abilities and disabilities, sexual orientations, gender identities and expressions, and ages—and reflect their circumstances and aspirations, including equal rights.”

Jay Cameron of the Justice Centre for Constitutional Freedoms told The Epoch Times, “The idea that the CRTC would have the power to ‘incentivize inclusive speech’ sounds an awful lot like code for ‘the power to punish speech it considers non-inclusive,’ does it not?”

Cameron is also concerned about the government’s proposed legislation on hate speech.

“What the federal Liberals mean by online hate speech is really speech online that they don’t like and is disagreeable to their supporters because it departs from progressive orthodoxy,” he said.

“In Canada, section 2(b) of the Charter protects the right to have your own thoughts and beliefs and to express them. This includes thoughts, beliefs, and opinions the heritage minister does not like. In other words, the reason Canadians have a Constitution in the first place is to protect them from authoritarian politicians like Stephen Guilbeault.”

Rachel Curran, former policy director for the Stephen Harper government and current public policy manager with Facebook, told a panel discussion of the Canada Strong and Free Network that there is a real concern hate speech could include speech that is critical of the government, however remote the chance of that may seem today.

“I’d like to say that no government in Canada, at least, would ever do that … but I’m not totally confident that’s the case,” Curran said.

Also speaking at the panel, titled “The Coming Tsunami of Online Regulation,” was Christine Van Geyn, litigation director for the Canadian Constitution Foundation. Van Geyn warned that there are other concerning government proposals, such as removing the discretion of provincial attorneys general to decline to prosecute hate crimes. Also, online platforms might get penalized if they failed to remove hate speech within 24 hours.

“Platforms might seek to avoid a penalty being imposed on them, so they would pre-emptively take down content that doesn’t actually meet the threshold … removing content that is an important part of political and public debate and raises important questions,” Van Geyn said.

There could also be new online content regulation requirements in the proposed privacy legislation. Prime Minister Justin Trudeau has directed Minister of Innovation, Science, and Industry Navdeep Bains to increase the privacy commissioner’s powers to establish new online rights, including “the ability to be free from online discrimination including bias and harassment.”

In its current form, Bill C-10 does not mention discrimination. However, scholars such as law professor Teresa Scassa at the University of Ottawa have noted that its legislative impact could change “potentially dramatically.” In a commentary for Policy Options, Scassa wrote, “Regulations are made by cabinet and offer a more expedient means of changing the law—although it is less public and less open to bi-partisan debate.”

Columnist John Robson, an adjunct professor at Augustine College, told The Epoch Times, “There’s 1,000 ways in which it’s possible for the government to restrict what you say, and they’re doing it in the conviction that they’re virtuous.”

He said he expects speech will be stifled by “regulatory hassles and subsidies, and it’s going to be the death of a thousand cuts, not one beheading.”

But Robson said free speech must be allowed for three reasons.

“One, it might be true. Two, if it’s really bad, we need to expose it and destroy it. And three, we need to understand our own ideas and enrich them instead of just reciting them,” he said.

“And unless you believe that falsehood will defeat truth in a fair fight, you have nothing to fear from bad ideas.”

Go Back: World News
Previous: Decriminalization Not the Way to Deal With Opioid Crisis, Experts Say
Next: Person of Interest Identified but Not Arrested in Billionaire Murders: Police
source : www.theepochtimes.com
''

Refugee Resettlement Coordinator Is Hopeful For What Comes Next Under Biden

Coronavirus FAQ: Why Am I Suddenly Hearing So Much About KF94 Masks?