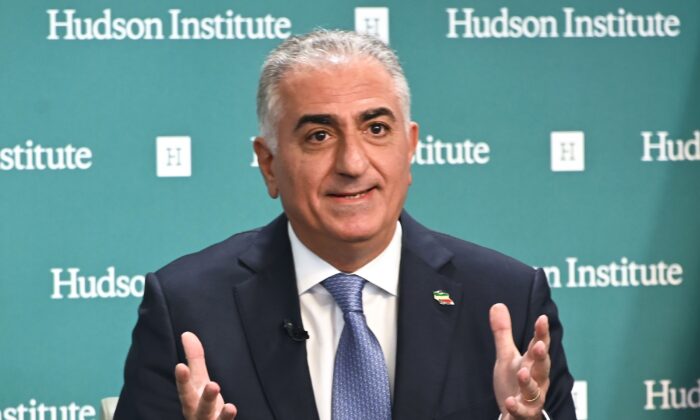 The former crown prince of Iran, heir of the deposed monarchy on Jan. 15 said that the “beginning of the end” of the Iranian regime has started, as he called for maximum pressure on the Islamic Republic and for constructive, not divisive dialogue.

Maryland-based Reza Pahlavi said the protests that struck some 100 cities and towns across Iran beginning Nov. 15, and again, following the accidental downing of a Ukrainian passenger jet by Iran’s paramilitary Revolutionary Guard on Jan. 8, reminded him of the uprising that ousted his father in early 1979.

“We are beginning to see the end of this regime,” the 59-year-old heir to the Peacock Throne told reporters at the Hudson Institute in Washington on Wednesday. “It’s just a matter of time for it to reach its final climax. I think we’re in that mode.”

“This is weeks or months preceding the ultimate collapse, not dissimilar to the last three months in 1978 before the revolution.”

With this regime, there is no reasonable prospect of sustainable de-escalation. But with the Iranian people, there is the opportunity for sustained peace and friendship, because there is no quarrel, to begin with— just shared interests, shared values, and for now, a shared enemy.

The exiled Prince said that for the first time in four decades, “people smell the opportunity.”

“The people have had it. Today’s generation of young Iranians cannot take it anymore. They want to have an opportunity for a better future,” he said. “They want to be on the path of modernity and freedom. The only thing that stands between them and the free world is this regime.”

Pahlavi urged the United States and their representatives to support the Iranian people in overthrowing the regime while demanding Supreme Leader Ayatollah Ali Khamenei’s resignation and a peaceful transition “with the minimum amount of casualties.”

“It’s time for him to let go and step down and allow the people of Iran to free themselves,” he said.

Widespread protests rocked the region after authorities announced a new petrol-rationing scheme that would see gasoline prices raised by 50 percent. Authorities said the new scheme aims to redistribute money to the country’s neediest citizens, however, it quickly faced a backlash from citizens throughout the country who took to the streets to call for an end to the Islamic Republic’s government.

Amnesty International reported on Dec. 2 that at least 208 people were believed to have been killed during anti-government demonstrations in Iran, citing “credible reports” for its death toll, including sources inside and outside Iran, including victims’ relatives, journalists, and human rights activists.

“The real figure is likely to be higher,” the report stated.

Protests also erupted across Iran over the weekend after the downing of the Ukrainian airliner, which the military said it mistakenly shot down at a time when Tehran was fearing U.S. airstrikes. Riot police fired teargas on Saturday at thousands of protesters in the capital, where many chanted “Death to the dictator,” directing their anger at the Islamic Republic’s Supreme Leader.

Pahlavi called for constructive, not divisive dialogue in the wake of heavy unrest across the region.

“Choose what you cover and how you cover it to see whether we can come up with a solution, rather than to simply tease arguments that have been divisive and not constructive towards a better future,” Pahlavi said.

He added that “mechanisms” should be built to “provide the nation with yet another layer of protection to make sure that no one deviates from the law, that no one is above the law.”

AFP and Petr Svab contributed to this report.