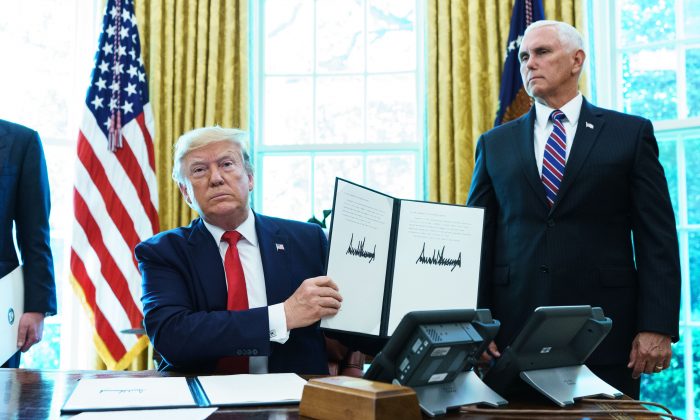 Tensions in the Persian Gulf increased Friday after Tehran announced it had downed an “unknown” drone the Islamic regime claims had violated Iranian airspace. The Pentagon has stated that all U.S. drones have been accounted for.

Iranian reports said that the drone was downed in the early hours of Friday near the critical southwestern port city of Bandar-e Mahshahr on the country’s Gulf Coast. The city is located in an oil-rich region and is home to a number of Iran’s most important oil refineries and storage depots.

Gholamreza Shariati, the Provincial Governor, told Iran’s official news agency IRNA that the drone definitely belonged to a foreign country, and that the wreckage had been recovered and was being examined by Iranian investigators.

The IRNA also released a video that apparently shows the firing of the surface-to-air missile that took out the drone. The agency did not comment on whether the device was a military drone or a commercially available device. Meanwhile, Fox News reported that a U.S. military official had stated that all American drones had been accounted for and none shot down.

The incident follows a period of heightened tensions with Iran. In June, a U.S. surveillance drone was shot down over the Strait of Hormuz by Iranian forces. While Iran insisted it had been defending its airspace, the U.S. called the missile strike “an unprovoked attack” that occurred outside of Iranian airspace.

Following pressure from members of the U.S. Congress, social media giant Twitter moved this week to ban the internationally recognized, Iran-backed terror organizations Hamas and Hezbollah from their platform. The move garnered widespread praise, including from Jonathan Conricus, the International Spokesperson of the Israeli Defense Forces (IDF).

Kudos to @Twitter for suspending the accounts of terror groups #Hezbollah and #Hamas.

Internationally recognized terror groups should never have a platform for their violent extremism. pic.twitter.com/2Dm8bEcB6S

Iran also announced this week that it had prevented a United Nations inspector from inspecting a nuclear site recently because, the regime claimed, she had tested positive for nitrates, which can be used in explosives. The female inspector was also temporarily prevented from leaving Iran. The International Atomic Energy Agency (IAEA) rejected the claims.

Preventing an inspector from leaving a country, particularly when instructed to do so by the IAEA, is not acceptable and should not occur, Mr Feruta said. 2/4

The IAEA will continue to consult with Iran with a view to clarifying the situation. 4/4

Iran claimed this week that it had begun injecting uranium gas into more of its centrifuges at the Fordo nuclear site. This move signals a further departure from the Joint Comprehensive Plan of Action (JCPOA)—the Iran Nuclear Deal—as it will allow Iran to enrich uranium up to 4.5 percent, which is beyond the limits set in the JCPOA. However, enrichment beyond 90 percent is necessary to produce weapons-grade material.

On May 8, 2018, President Donald Trump announced that the U.S. was withdrawing from the Iran Nuclear Deal. French President Emmanuel Macron said this week that the Iranian move toward further enrichment effectively signals their withdrawal from the agreement. Iranian leader Hassan Rouhani has yet to make an official statement on the plan.

This week also marked the 40th anniversary of the takeover of the U.S. Embassy in Tehran. Over 50 American diplomats were taken hostage in November, 1979, and were held for 444 days before being released.

Go Back: World News
Previous: Holocaust survivor and senator for life, 89, gets police protection after receiving 200 threats each day
Next: Rockets Hit Iraq Base Hosting US Troops: Reports
source : www.theepochtimes.com
''