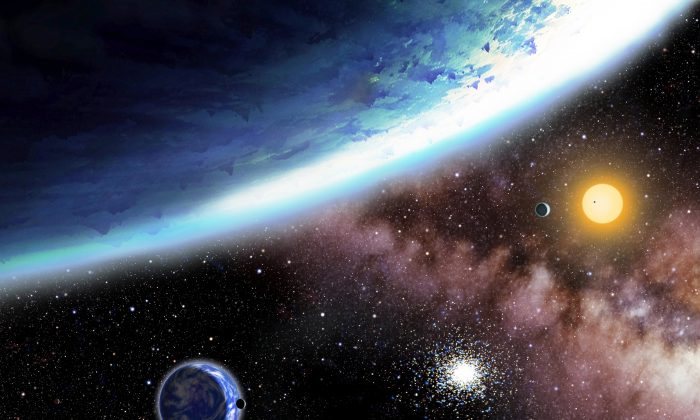 Aliens or non-human civilized life within our own Milky Way could have already visited Earth but we just aren’t aware of it, a new study says.

The study, published Aug. 20 in The Astronomical Journal, examines the Fermi Paradox and suggests that it’s possible that alien civilizations have visited Earth but that it was so long ago, we weren’t around to see it. The study set out to examine the Fermi Paradox, which questions why we haven’t been able to detect signs of alien life.

Referring to the possibility of travel between stars by extraterrestrial life, if it exists, physicist Enrico Fermi once famously asked: “Where is everybody?”

The study says that interstellar alien civilizations could simply be taking a strategic and timed approach to traveling the galaxy by utilizing the movement of star systems to migrate.

“If you don’t account for motion of stars when you try to solve this problem, you’re basically left with one of two solutions,” Jonathan Carroll-Nellenback, a computational scientist and the study’s lead author, told Business Insider. “Either nobody leaves their planet, or we are in fact the only technological civilization in the galaxy.”

Carroll-Nellenback said his findings challenged a paper by astrophysicist Michael Hart who argued in 1975 that it is unlikely other civilized lifeforms had not already been discovered in the 13.6 billion-year-old galaxy. Carroll-Nellenback said that Hart hadn’t taken into account movement the of our galaxy in his research that could influence the timing of interstellar travel.

While planets orbit stars, the galactic center is also orbited by star systems. It takes 230 million years for our solar system to orbit the Milky Way.

Taking into account the fact that solar systems orbit at various speeds, the study says it’s possible that alien lifeforms could be waiting for habitable zones to move closer to them. This could mean that extraterrestrials may have visited earth millions of years before humans evolved, or they may not have reached Earth yet, according to the paper.

“Habitable worlds are so rare that you have to wait longer than any civilisation is expected to last before another one comes in range,” Carroll-Nellenback told Business Insider.

He added that discouraging research on the topic so far doesn’t mean alien life isn’t out there.

“It doesn’t mean that we’re alone,” he said. “It just means that habitable planets are probably rare and hard to get to.”

The paper concluded that to rule out the possibility of any life on all of the galaxy’s estimated habitable planets would be like failing to find dolphins in a pool-sized patch of the ocean and then claiming that there are no dolphins.

Alien Life May Exist on Planet 30 Trillion Miles From Earth

Researchers say that alien life could possibly exist on a planet 30 trillion miles from Earth.

Barnard B, the planet that orbits around Barnard’s Star, could have the potential for life if water exists there, according to study published by astrophysicists at Villanova University in January. The star is located some six light-years away from Earth in the constellation of Ophiuchus and is the fourth-nearest known star to the Sun.

An ocean could provide the possibility for the existence of primitive life due to geothermal heating.

“Geothermal heating could support ‘life zones’ under its surface, akin to subsurface lakes found in Antarctica,” said one of the authors, Edward Guinan, in a statement.

According to the paper, the temperature on Barnard B is similar to Europa, Jupiter’s moon—roughly 238 degrees Fahrenheit below zero.

But if there is water on the planet, geothermal heating could provide conditions for life in an otherwise inhospitable environment, the researchers say.

“We note that the surface temperature on Jupiter’s icy moon Europa is similar to Barnard b but, because of tidal heating, Europa probably has liquid oceans under its icy surface,” Guinan said in the statement.

Why Monkeys Choose To Drink Alone

The 'Purrfect' Music for Calming Cats
Naomi Seibt -- The Anti-Greta Who Gets It, Well Much of It.

Medical Breakthrough: A Cure For Eczema?