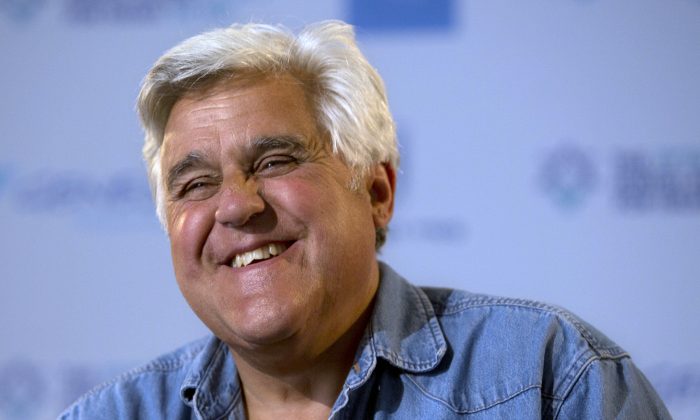 This May 21, 2014 file photo shows American comedian Jay Leno reacts during an interview with the Associated Press in Jerusalem. Newly retired from The Tonight Show, Leno is now being awarded the nations top humor prize by the Kennedy Center for the Performing Arts. Leno will be honored with the Mark Twain Prize for American Humor by his fellow comedians in a performance Oct. 19 in Washington. The show will be broadcast nationally in November on PBS. (AP Photo/Sebastian Scheiner, File)
Updated: 2019-12-02 21:50:18

Jay Leno issued a statement days after Gabrielle Union departed from “America’s Got Talent” amid controversy.

He told TMZ on Sunday night that he enjoyed working with her and that she’s a “great girl.”

When he was asked about whether she was treated fairly on the program, he replied, “I don’t know…but I think she’s a great girl.”

Last week, Variety reported that Union reacted negatively to an allegedly insensitive joke made by Leno about Koreans eating dogs. The report also alleged that she and host Julianne Hough, who departed the show alongside Union, were subject to “excessive notes” about their physical appearance. Regarding the joke, Union reportedly wanted the show’s producers to take the matter up with the human resources department but nothing was done.

Leno didn’t comment on the alleged joke when he was asked by a TMZ reporter about it.

A spokesperson for NBC and Fremantle issued a statement to People magazine. “The judging and host line-up has been regularly refreshed over the years and that is one of the reasons for AGT’s enduring popularity. NBC and the producers take any issues on set seriously,” it said.

“We remain committed to ensuring a respectful workplace for all employees and take very seriously any questions about workplace culture,” Syco Entertainment, which produces “America’s Got Talent,” told Yahoo on Sunday.”We are working with Ms. Union through her representatives to hear more about her concerns, following which we will take whatever next steps may be appropriate.”

Hough, meanwhile, said she didn’t have any issues while working on the show.

“I had a wonderful time on America’s Got Talent, I loved working with the cast, crew, and producers,” Hough told People.

On social media, a number of celebrities slammed NBC and expressed their support for Union.

Over the past several months, NBC experienced a number controversies—namely the Matt Lauer fallout after a book recently penned by Ronan Farrow revealed more lurid allegations against the former “Today” host.

In the wake of the book’s release, the digital portion of NBC News announced on Oct. 30 it formed a union and alleged the network “mishandled” sexual assault allegations, including those against longtime “Today” show host Matt Lauer.

The newly formed NBC News Guild claimed the network “mishandled serious incidents of sexual misconduct and racism without the transparency and sensitivity such issues require.”

“Recent weeks have highlighted serious questions as to how NBC News has handled incidents of sexual misconduct in the workplace as well as the opaque processes and procedures for reporting on and exposing powerful predators. NBC News repeatedly refused calls for an independent review on both counts despite numerous such requests from staff. This lack of transparency and NBC News’ troubling trend of passing on stories which investigate the powerful ultimately harm our credibility as journalists,” the union added.