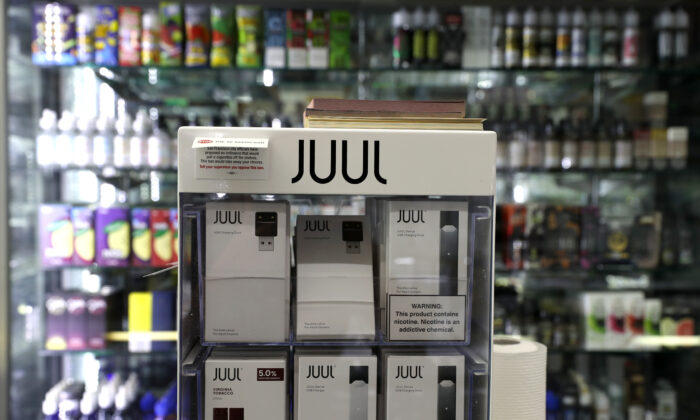 As vaping-related illnesses and deaths continue to rise, Juul Labs, the top-selling e-cigarette brand in the United States, announced they would stop selling their fruit and dessert flavors.

The move is the company’s latest attempt to calm down a backlash from a growing number of people who blame its flavored-nicotine products for hooking a generation of teenagers on electronic cigarettes. Juul is currently facing intense scrutiny and is being investigated by Congress, the Food and Drug Administration, and several state attorneys general.

There have been 1,479 lung injury cases linked with the use of e-cigarettes, or vaping, as of Oct. 15, according to the latest data by The Centers for Disease Control and Prevention. The reports to the center came from, the District of Columbia, one U.S. territory, and all states except Alaska.

Thirty-three deaths related to this outbreak have been confirmed in 24 states. Earlier this month, there were 15 confirmed fatalities. The CDC updates its data counts each week.

Juul is also being sued by adults and underage users who claim they became addicted to nicotine by using the company’s products. The Trump administration announced last month that it will be authorizing the FDA to finalize rules banning the sale of all non-tobacco-flavored e-cigarettes. According to the White House, about 8 million adults use e-cigarettes, and so do 5 million U.S. children.

The flavors affected by Juul’s latest announcement—mango, crème, fruit, and cucumber—account for 10 percent of Juul’s sales. It will continue selling its most popular flavors, mint and menthol, for now. A spokesman said the company is reviewing its products and practices and has not made “any final decisions.”

Juul, based in San Francisco, will also continue to sell its tobacco-flavored vaping pods.

This week’s move marks a remarkable shift for Juul, which had argued for years that its flavors help adult smokers quit cigarettes.

But the announcement doesn’t necessarily mean the permanent end of Juul’s flavors. Instead, Juul CEO K.C. Crosthwaite said the company would defer to the Food and Drug Administration, which has set a deadline of next May for manufacturers to submit their vaping products for federal review.

According to the CDC, the first cases involving lung illnesses and e-cigarettes began in March. All patients who reported cases to the center had a history of using e-cigarettes or vaping.

In September, the center recommended against using e-cigarettes or vaping products that contain the Marijuana ingredient tetrahydrocannabinol (THC). Most of the patients who reported their cases had a history of using THC-containing products as well.

The specific cause of these lung injuries and deaths is still not known, according to the center. Nicotine, which is found in these products, is also highly addictive and “can harm adolescent brain development, which continues into the early to mid-20s.”

Erin Rice Mills, a New York mother and advocate from the national grassroots group “Parents Against Vaping,” told The Epoch Times previously that the rise of counterfeit vaping products, black-market vendors, and the lack of regulation are creating a toxic mix.

“It’s the ‘Wild West’ right now in the vaping industry,” Mills said in a phone call. “It really is an urgent matter that needs to be addressed.”