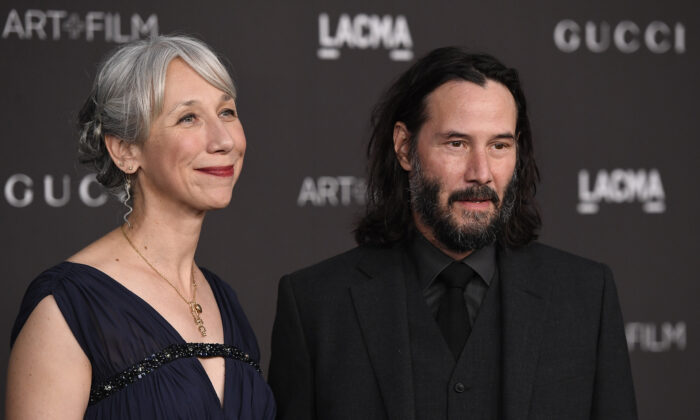 The Hollywood actor put on an affectionate display with 46-year-old Grant as the pair held hands and posed for photographers at the event.

According to People, the 55-year-old “Matrix” star has been friends with Grant for a number of years and they previously collaborated on his 2011 book, “Ode to Happiness.”

The publication says that the couple also collaborated on his second book, “Shadows,” for which Grant did the illustrations.

They also founded X Artists’ Books, a publishing house that they established in 2017, it reports.

According to her website, Grant is a Swarthmore College graduate and based in LA, “who through an exploration of the use of text and language in various media—painting, drawing, sculpture, film, and photography—probes ideas of translation, identity, dis/location, and social responsibility”.

Her work has been exhibited in a number of galleries in LA including the Honor Fraser Gallery and Night Gallery as well as the Galerie Lelong in New York and Paris and Harris Lieberman Gallery in New York City.

Saturday’s red carpet debut follows reports that Reeves had been growing close to the artist after they were photographed holding hands while leaving a sushi bar on Sunset Boulevard in Los Angeles in mid-October.

The “Speed” star has maintained a notoriously private personal life and has avoided public displays of affection during his 35-year-long career.

His love life has also been marred by tragedy which Reeves has rarely spoken about in public.

During the 1990s, the actor dated girlfriend Jennifer Syme but the pair split in 2000 following the tragic birth of their stillborn baby, which reportedly put a strain on their relationship.

Syme was killed in a traffic collision in Los Angeles in 2001 after losing control of her jeep, sideswiping three parked cars, and then being thrown from the vehicle.

She was just 28 years old when she died and she and Reeves had reportedly maintained a close friendship, despite their split.

Reeves has been linked to a number of A-list movie stars in the past, including his “Speed” co-star Sandra Bullock, “Meet Joe Black” star Claire Forlani, and actresses China Chow and Jill Schoelen.

He is also said to have dated British photographer Amanda de Cadenet, however he has never publicly commented on any of the reported relationships.

Meanwhile, Reeves is set to reprise his role as Neo in the upcoming “Matrix 4” movie, the release date for which has not yet been announced.

He is also set to star in science fiction comedy “Bill and Ted Face the Music” next year.