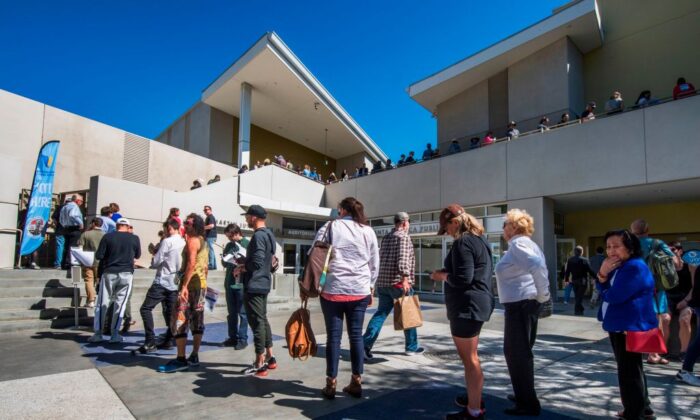 LOS ANGELES (CNS)—Los Angeles County officials peppered the man responsible for running elections with questions on July 7, hoping to ferret out any remaining weaknesses in the county’s high-tech voting system before November.

Supervisor Janice Hahn asked Registrar-Recorder/County Clerk Dean Logan to update the County Board of Supervisors on preparations for the general election to give him “an opportunity to restore the confidence of our voting public in our system and how we’re going to run it.”

The discussion came after failures during the March primary that led to long lines of voters waiting to cast ballots after polls had closed, and two reports—one by an outside consultant and one by Logan’s department—diagnosing the problems.

Both reports pointed to electronic polling technology used to check in voters as the primary source of bottlenecks. The technology frequently froze up, had issues synchronizing with a state database, and not all volunteers understood how to remedy technical problems or had access to help desk-style assistance.

Hahn also pointed to voting centers where electronic voting machines were out of service, though that was not a critical issue according to the analyses.

“When I went into my vote center, some machines had X’s and were taped up and not available,” Hahn said. “We were criticized roundly because the county invested millions of dollars into this new voting experience.”

More electronic poll books—which have been retested by the manufacturer to resolve problems—will be available at each center and will include new, streamlined voter look-up features, according to Logan. A complete retesting of the voting system by an independent party is also planned, to be certified by the secretary of state.

Despite all the work going into planning for in-person voting, county officials are hoping to persuade a majority of voters to use mail-in ballots to limit the spread of the CCP (Chinese Communist Party) virus, commonly known as the novel coronavirus.

In advance of the November election, every registered voter will be sent a vote-by-mail ballot. However, Logan said elections in the county held since March, as well as primaries in other states, indicate that many voters will still want to cast a ballot in person.

“Even with mailing ballots to all voters and with the impact of COVID-19, there’s a good indication that a high number of voters will still choose to vote in person,” Logan told the board. “We know, for instance, that in March, 42 percent of the voters who voted in person had been mailed a vote-by-mail ballot. So that’s a dynamic that we know we have to pay attention to.”

Hahn worried aloud about misinformation reaching voters about the safety of mail-in ballots.

“There is misinformation spread during election season,” she said. “There will be some messaging out there to keep people away from voting by mail.”

Better education of voters will be part of the process, and Logan said the county would spend significant resources on a multimedia campaign to get the word out about how the system works and to encourage voting by mail.

To accommodate crowds still expected to show up in person, the county will again open voting centers early, allowing residents to cast a vote at any of more than 114 locations countywide during the 10 days before Election Day. On Election Day, more than 570 centers will be open, and new software will allow voters to track wait times.

Those numbers represent legal minimums, and Logan promised the board he would open many more. He plans to report back later this month with specific totals and locations based on analysis currently underway. One determinant in setting locations is that most March primary voters cast ballots within three miles of their home.

In addition to software breakdowns, a lack of training and insufficient staffing were cited as other sources of voting problems during the March primary. Logan said recruitment would start earlier and more county workers, rather than citizen volunteers, would be trained to help voters this time out. Technical training will also be enhanced, he told the board.

He noted that volunteers may be more reluctant to participate, given concerns about COVID-19.

“[We] need to rely on the county workforce to support the elections process,” Logan told the board. “We have a proposal we are working on with the CEO to … revamp a model that is similar to the disaster service worker program to utilize county employees at the vote centers.”

The county’s Voting Solutions for All People system was developed over the course of a decade, and described in a report commissioned by the board as a “highly ambitious project that dramatically changed the experience of voting in the nation’s most populous county.”

In addition to following recommendations from an outside consultant, the department has been collaborating with the secretary of state and getting input from numerous community members in implementing changes designed to ensure that the November election runs smoothly.

As for COVID-19, Logan said his department was working with public health officials to put protocols in place, and reminded the board that some elections have already been held during the pandemic.

Larger venues will be chosen to allow for social distancing. Voters and staffers will be required to wear masks, and voting equipment will be wiped down after each use. Supplies of masks, gloves, and sanitizer will be provided by the county.

The Epoch Times refers to the novel coronavirus, which causes the disease COVID-19, as the CCP virus because the Chinese Communist Party’s cover-up and mismanagement allowed the virus to spread throughout China and create a global pandemic.