Lack of Toothbrushing Creates Risk for Seniors in Nursing Homes 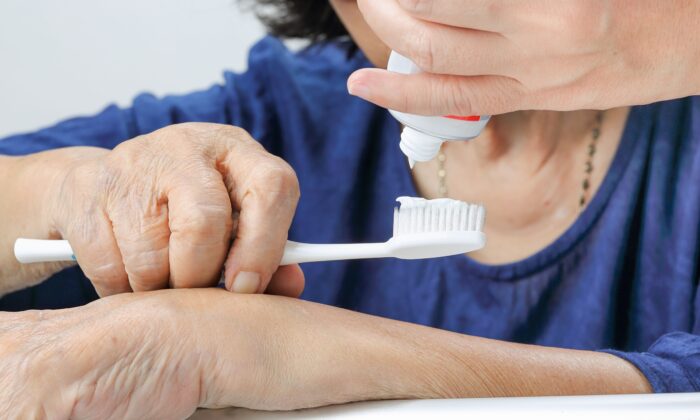 Many seniors that are unable to take care of themselves are left with little support within nursing homes and hospitals when it comes to taking care of their teeth. (Toa55/Shutterstock)
Updated: 2019-10-21 02:10:30

While it might be icky to imagine the horrible way that feels to our elders, there are consequences worse than grossness. The mouth and other parts of the oral cavity are a gateway into the body, allowing bacteria inside our bodies that can cause serious disease.

This lack of basic care is big issue for seniors in nursing homes, who number about 1.3 million. It is an example of serious challenges that these facilities face in keeping people healthy. One recent study published in Special Care in Dentistry in 2017 found that only 10.3 percent of patients admitted to a nursing home over a five-year period utilized dental services within the home at least once during their stay.

I am a dentist and periodontist also trained in microbiology. About 30 years ago, I began to investigate how bacteria in the mouth could affect overall health. My colleagues and I determined, for example, that bacteria that cause pneumonia likely first stick to teeth before being aspirated or inhaled, into the lungs, especially in vulnerable patients such as those who are intubated in intensive care units or who reside in nursing homes. In one study, we found that the bacteria cultured from the lungs of hospitalized patients with diagnosed pneumonia were identical to those cultured from the teeth of the same patients.

There is good documentation that oral hygiene in hospitalized and nursing home patients is often overlooked, deficient, and sometimes ignored. The lack of care, including toothbrushing, has been ignored for years, in part because basic Medicare doesn’t cover dental care.

Thousands of people a day who are in nursing homes often go without their teeth being brushed. The bacteria that arise as a result of the poor care often are resistant to antibiotics, and contribute to infections that are commonly found in these places.

And, there is considerable evidence and general agreement that microbes that cause pneumonia in health care facilities can enter the lungs through the mouth to cause severe lung infections.

This problem will certainly worsen as the population ages and more people will require nursing home care.

Of Oral Biofilms and Pneumonia

One of the best-documented connections between the oral cavity, which includes the teeth, tongue, and gums, and overall health is pneumonia. A substantial body of evidence suggests that attention to oral hygiene can reduce the risk of pneumonia. This is especially well documented in the case of hospital- and nursing home-acquired pneumonia, common forms of pneumonia that kill many people and have a large economic impact. Bacteria first make a home in the mouth and can then be aspirated, or inhaled, into the lungs to cause serious infections.

The bacteria that normally reside in the mouth grow as dental plaque, a biofilm that firmly attaches to teeth and oral surfaces such as the tongue. Dental plaque is difficult to remove, and the bacteria within them are more resistant to antimicrobial rinses.

While toothbrushing and flossing help, the best way to remove biofilm like dental plaque is for a professional such as a dentist or hygienist to remove it with sharp instruments or ultrasonic scalers. This mostly doesn’t happen since payment for such services are rarely covered by medical insurance. Various interventions have been explored and show promise, including nurse-assisted toothbrushing, oral rinses such as chlorhexidine and betadine, and topical antibiotics.

For toothbrushing and flossing to work, they must be performed meticulously twice a day.

Older patients are often too sick to do this themselves, or they may not do it well enough. While nurses and nursing aids can perform this task, they are often overwhelmed with doing other things, and they themselves may not be sufficiently practiced to this task well. Performing effective oral hygiene is quite difficult and time-consuming. It is also often unpleasant due to the fact that oral biofilms often produce unpleasant odors, and may contain food debris.

As a result, oral hygiene is, at best, usually performed inadequately for these patients, and at worst, not performed at all.

As a practitioner and researcher, I find it frustrating that proposals to study more effective methods to improve hygiene in older people are almost always passed over by granting agencies. The reasons for this aren’t clear, but I wonder if there is bias from medical researchers against the idea that dental care is worth the cost in this setting?

There are some glimmers of hope. A number of scientific studies have been published to document how the implementation of oral care strategies can reduce the level of serious infections such as pneumonia. One recent study found that enhanced oral care before surgery and on the units, along with other tasks, such as enhanced management of tubes inserted into the trachea and appropriate stress ulcer medication, statistically reduced pneumonia rates over a four-year period. Such outcomes require widespread attention not only by caregivers such as nurses, but also by attending physicians, managers, and ultimately insurance providers.

Frank Scannapieco is a professor and chair of oral biology at the State University of New York–Buffalo. This article was first published on The Conversation.

Go Back: Life Style
Previous: These Commonly Used Antibiotics Are Tied to Heart Problems
Next: How Much Do Sedentary People Really Need to Move?
source : www.theepochtimes.com
''