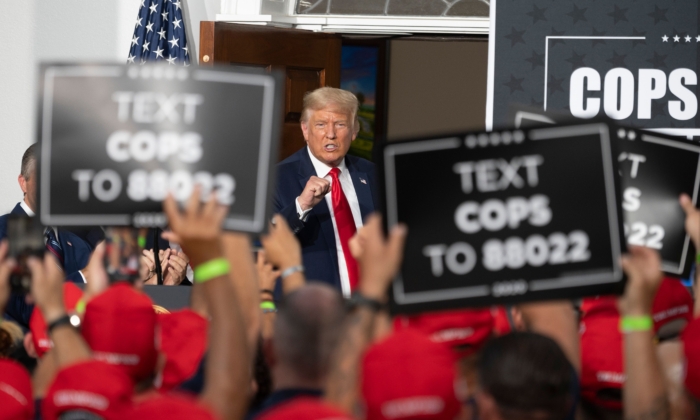 President Donald Trump pumps his fist as he delivers remarks to the City of New York Police Benevolent Association at the Trump National Golf Club in Bedminster, NJ, on August 14, 2020. (Jim Watson/AFP via Getty Images)
Updated: 2020-08-15 08:03:02

“I have 36 years in this job, 21 as a president of this fine organization. I cannot remember when we’ve ever endorsed for the office of president of the United States until now. That’s how important this is,” said Patrick Lynch, the president of the Police Benevolent Association of the City of New York (PBA).

The endorsement comes as far-left groups around the country have ramped up efforts to defund police departments and demonize law enforcement.

The mayor signed a law in July criminalizing several safe, nonviolent martial arts techniques used by police around the country and the world to subdue resisting subjects. Police officers will thus have to resort to other methods that are often more violent and put both the officers and the people they attempt to arrest in greater danger, some experts say.

“We’re going to give you back your status,” Trump said at the endorsement event in New York City. “I hate to say it but it’s been taken away.”

“We’re gonna give New York a real shot,” Trump said. “I think we have a real chance of winning New York.”

The endorsement as a wave of crime and violence unseen since the crack epidemic of the 1990s engulfs the city. More than 320 people were shot in the four weeks ending July 19, up more than 200 percent from the same period last year. Murder is up 24 percent this year compared to last year.

The demonization of police nationwide is driven by the Black Lives Matter movement and a battery of horizontally organized Antifa extremist groups.

The recent unrest was triggered by the police-custody death of George Floyd. Trump has said was happened to Floyd was terrible, but placed the blame on a few “bad apples” while defending police forces across the country as essential for preserving law and order.

The PBA has previously endorsed candidates in races for local races, including billionaire Mike Bloomberg for mayor of New York City and Andrew Cuomo for governor.

Trump’s presumptive Democratic opponent, former vice president Joe Biden, has racked up a long list of endorsements, but none from a major law enforcement group. The National Association of Police Organizations endorsed Trump in July after endorsing the Obama-Biden ticket in 2008 and 2012.

The Biden campaign did not respond to a request for comment.

Petr Svab contributed to this report.