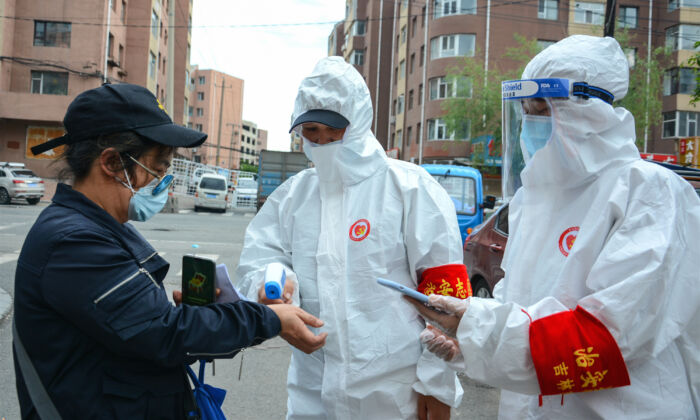 As a second wave virus outbreak ripples through parts of China, Chinese authorities’ reporting of virus data has been opaque. There are no cumulative infection figures, with local governments only reporting new infections daily. Asymptomatic carriers are also counted separately from “confirmed diagnoses,” while little background is provided about the diagnosed patients.

Currently, the most severe outbreak is occurring in Jilin city, Jilin Province.

Internal documents obtained by The Epoch Times revealed that local authorities hid information from the public about the “patient zero,” as well as police officers and medical staff who were diagnosed with COVID-19, the disease caused by the CCP virus.

For two days in May, the Jilin provincial government did not report all diagnosed patients, while the central government diluted data further, the documents also showed.

Since early April, after a brief period in which most regions of China reported little to no new infections, second wave outbreaks have occurred in several Chinese provinces, including Jilin in northeastern China.

Since May, the Jilin provincial health commission announced publicly that the “patient zero” in the second wave outbreak is a 45-year-old cleaning staff who works at the Shulan city police bureau, surnamed Li. Shulan is a county-level municipality within Jilin city.

The Epoch Times obtained a batch of internal reports, drafted by the Jilin provincial Center for Disease Control and Prevention (CDC) and reported to the national CDC. Several reports detailed the cases of people who were diagnosed before Li.

The Jilin authority keeps a separate file for each COVID-19 patient.

Li’s file explains that she developed a fever, a typical COVID-19 symptom, on May 6. She was diagnosed on May 7.

However, another Jilin CDC file, dated May 9, notes that a 47-year-old police officer who worked at the same bureau, surnamed Huang, developed a fever on May 5—one day earlier than Li. Huang was formally diagnosed on May 9.

Huang works at the criminal police department, and is close to Li and her husband, who is also a staffer at the bureau and COVID-positive, according to the documents.

In another file, the Jilin CDC reported that Hao, a 29-year-old auxiliary police at the Shulan bureau, started to feel feverish on May 3. From May 5 to May 7, Hao received infusion therapy at a local private clinic every day.

On May 7, Hao’s condition deteriorated. He visited a local diagnostic center. Then, he was isolated at different hospitals as a suspected patient, until he was formally diagnosed on May 10.

Huang and Hao’s cases cast doubt on the authorities’ claim that Li is the patient zero.

Aside from Li, local authorities have not previously disclosed that confirmed COVID-19 patients were staff at local police agencies. But the patient files obtained by The Epoch Times generally match the profiles of individuals previously confirmed as COVID-positive by authorities.

Local residents previously told the Chinese-language Epoch Times that the Shulan police bureau was under lockdown due to a cluster outbreak.

On May 17, Geng Jianjun, deputy Party boss of the Shulan bureau, was dismissed from his position amid a string of sackings due to officials’ failure to contain the outbreak.

Go Back: China News
Previous: How Canada Can Unwind Its Alarming Dependence on China
Next: Epoch News: US Decoupling From China Accelerates, 33 Chinese Companies Added to List
source : www.theepochtimes.com
''