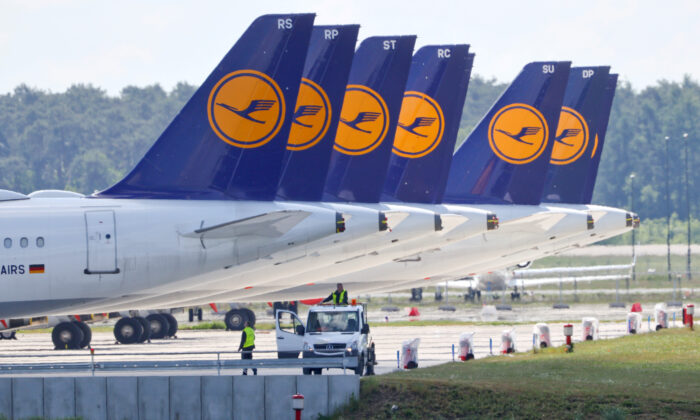 Airplanes of German carrier Lufthansa are parked at the Berlin Schoenefeld airport, amid the spread of the coronavirus disease (COVID-19) in Schoenefeld, Germany, on May 26, 2020. （Fabrizio Bensch/Reuters）
Updated: 2020-07-07 15:45:07

BERLIN—Germany’s Lufthansa airlines will cut 20 percent of its leadership positions and 1,000 administrative jobs in a restructuring plan that it announced on Tuesday to cope with fallout from the coronavirus crisis.

Lufthansa Group, which employs about 138,000 people, said it would also halve its investment in new aircraft, although it said that meant it could still add up to 80 new planes by 2023.

Shareholders backed a 9 billion euro ($10.2 billion) government bailout last month, securing the future of Germany’s flagship carrier after it was brought to the brink of collapse by the travel slump caused by the pandemic.

Lufthansa said on Tuesday it wanted to reduce government loans and equity stakes as soon as possible to avoid an increase in interest charges, adding that higher rates would increase the financial burden on the company and demand more cost cuts.

The airline said it had staff in 22,000 full-time positions it no longer needed but would try to avoid forced layoffs.

Lufthansa said it was trying to reach agreement with trade unions on layoff plans, but had only been successful so far with the UFO union representing German cabin crew. It said it was still in talks with unions representing pilots and ground staff.

The company said it would speed up longstanding plans to make its core Lufthansa airline a separate corporate entity, aiming to give the unit a clearer direction, a spokesman said.

Lufthansa decided in April to cut 100 aircraft from its fleet of about 760 and not to resume operations of its budget carrier Germanwings.