McEnany: CHOP Area in Seattle Was ‘Liberated From the Anarchists’ 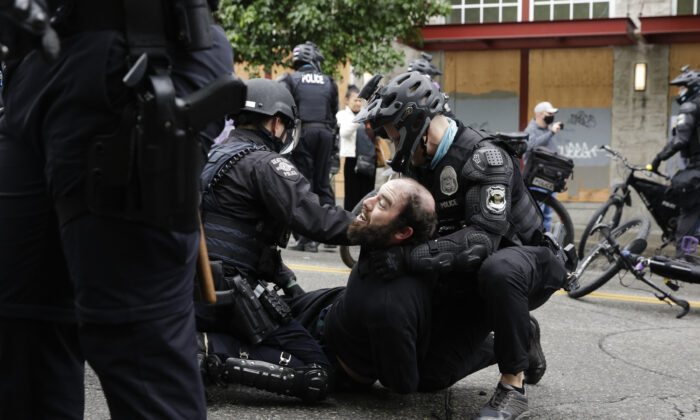 Seattle police arrest a demonstrator who was blocking the intersection of East Pine Street and 11th Avenue, as the city retakes the Capitol Hill Occupied Protest (CHOP) area in Seattle on July 1, 2020. (Jason Redmond/AFP via Getty Images)
Updated: 2020-07-02 13:45:04

The so-called CHOP area in Seattle was “liberated” in a victory for “law and order,” White House press secretary Kayleigh McEnany said after police officers cleared the autonomous zone.

Activists and agitators took over an area of multiple city blocks that was alternately known as CHOP and CHAZ, blocking police officers from entering as response times soared.

“I am pleased to inform everyone that Seattle has been liberated. The capital hill autonomous zone, CHAZ, was a failed four-week Democrat experiment by the radical left and the results are in. Anarchy is anti-American. Law and order is essential. Peace in our streets will be secured,” McEnany told reporters in Washington later Wednesday.

She brought up comments Durkan made shortly after the occupation started, which the mayor made in response to President Donald Trump’s vow to step in and take care of the situation if local and state officials did not.

Durkan said the occupation could lead to a “summer of love.”

“Lawfully gathering and expressing First Amendment rights, demanding we do better as a society, and providing true equity for communities of color is not terrorism—it is patriotism,” she told reporters.

CHAZ was not the summer of love, McEnany asserted.

Trump was ready to act in the face of failed leadership, she said, though he appeared to take no action in the three-plus weeks that the occupation took place. McEnany claimed that he “compelled action.”

“He has said take back your city now. If you don’t do it, I will. He said this is not a game,” she said.

Durkan’s office didn’t immediately respond to a request for comment.

Trump promised in late June not to allow a similar zone in Washington, D.C., as long as he’s president.

“If they try they will be met with serious force!” he said.

Protesters attempted to seal off an area near the White House on June 22, using fencing and other materials to create barriers.

Police officers removed the barriers, tents, and other items.

Seattle police officials, meanwhile, said 44 arrests were made on Wednesday as the zone was being cleared for failure to disperse, assault, obstruction, pedestrian interference, and malicious mischief.

In one case, officers used pepper spray while arresting a person who was armed with a metal pole. In another incident, an officer used a “less lethal” 40 mm sponge round on a man who appeared to be brandishing a metal pipe.

Officers were remaining in the area to ensure safety and might be making more arrests, the Seattle Police Department said in a statement.