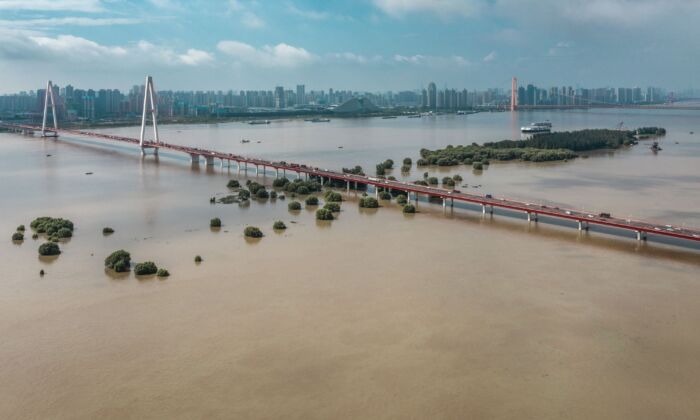 Four villages in the southwestern Chinese province of Guizhou were buried by mudslides in the early morning of July 8, causing roughly five hundred villagers to lose their homes within minutes. Meanwhile, heavy rain in other regions led to several rivers breaking their banks and submerging crop fields.

Mudslides also occurred other parts of Guizhou and in central China’s Hubei Province, but it was not immediately clear how many people were buried underneath.

Continuous rainfall has inundated the regions of Hubei, Guizhou, Hunan, Anhui, Fujian, Jiangxi, Sichuan, Chongqing, Zhejiang, Jiangsu, Yunnan, Guangxi, and Guangdong. The number of residents in these areas equates to roughly half of the entire Chinese population (about 695 million), but authorities claimed that only about twenty million people were impacted by the recent flooding.

Moreover, residents close to the site of mudslides in Guizhou told the Chinese-language Epoch Times that local authorities did not allow them to approach the disaster area and refused to tell them about the situation there.

But local villagers said the devastation was in fact much greater.

Li Jun (pseudonym), resident of the Shiban village in Ganlong, said many more houses were destroyed in his village alone. “Almost the whole village was buried. Only three or four houses are still standing. They [rescue team] dug out many fellow villagers from the mud, but they had already died,” he said in a July 8 interview.

Ganlong is the town farthest away from the city center in Tongren. The rescue team arrived after 10 a.m., over five hours after the mudslides occurred.

“It’s miserable!” Li said. He added that many villagers were washed away by the floodwater, over thousands of acres of land were submerged under the flood, and the main road connecting the township to the city was also destroyed.

Two connecting villages nearby—Ganlong Shangjie and Ganlong Xiajie—could also face mudslides. Jin Hu, a store owner at Ganlong Shangjie, said more than 1,000 rescue members arrived at the villages, but did not give them details about the catastrophe.

According to Jin, a nearby mountain called Fenghuang Ling has started to show cracks. Some of his fellow villagers moved to live with their relatives who are far away from the disaster area.

A restaurant owner at Mushu village, which is two miles away from Shiban, said: “The Shiban village is under lockdown. The officials don’t allow anyone to enter the village. We are not allowed to take out our phones from far away.”

When The Epoch Times contacted the Ganlong Clinic, the nearest medical center to Shiban, a receptionist said that most of its staff went to assist the disaster site, but refused to divulge more information. “All wounded people were sent to other hospitals,” she said.

From July 4 to July 7, rainfall in the northwestern province of Hunan, southeastern Hubei, southern Anhui, and northern Jiangxi reached 300 to 500 millimeters (11.8-19.7 inches), while rainfall in Huanggang city of Hubei reached a whopping 800 millimeters (31.5 inches), according to official data.

In one county in Jiangxi, the total rainfall in a 24-hour timespan from July 7 to 8 (about 21.2 inches) equated to the annual rainfall in Beijing thus far. Other cities in Jiangxi also recorded the heaviest rainfall in their history.

In a phone interview, he explained that all crop fields in the region were submerged by the flooding.

Meanwhile, in Wuyishan city in the southeastern province of Fujian, flooding on July 9 reached over four feet in most parts of the city and washed away cars and other private property.

Hongkongers Not Afraid of Resisting Despite Jimmy Lai Arrest