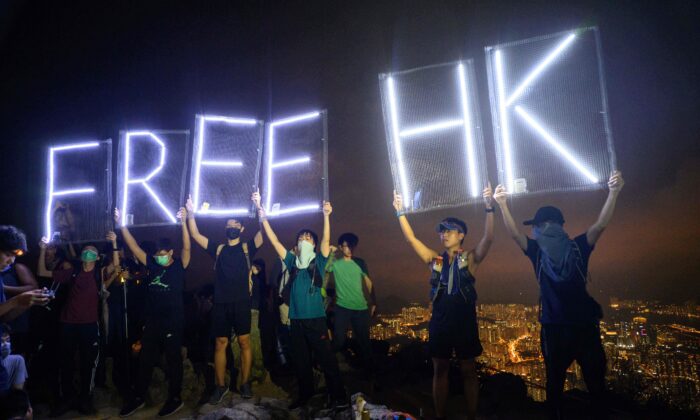 A Philadelphia 76ers fan was ejected from Wells Fargo Center in Philadelphia on Oct. 8 after voicing support for Hong Kong, the latest in the saga involving the NBA and China.

Sam Wachs and his wife were sitting about five rows from courtside holding signs with messages about Hong Kong. One stated “Free Hong Kong” and the other read “Free HK.”

Wachs told CBS Philadelphia that security took away the signs just before the game between the Sixers and a Chinese team started.

About halfway through the second quarter, Wachs and his wife began yelling “Free Hong Kong.”

Security went over and escorted them out of the arena.

“There’s no foul language, no politics. I asked why not. They said, ‘Don’t give me a hard time,'” Wachs told ABC 6.

The Sixers have not commented on the situation as of early Wednesday.

It’s the latest in an international saga that was spurred by Houston Rockets General Manager Daryl Morey, who last week posted a message in support of protesters in Hong Kong.

Rockets owner Tilman Fertitta quickly distanced himself from the sentiment and Morey later said in a statement: “I did not intend my tweet to cause any offense to Rockets fans and friends of mine in China. I was merely voicing one thought, based on one interpretation, of one complicated event.”

2/ I have always appreciated the significant support our Chinese fans and sponsors have provided and I would hope that those who are upset will know that offending or misunderstanding them was not my intention. My tweets are my own and in no way represent the Rockets or the NBA.

Rockets star James Harden apologized for Morey during a press briefing in China prior to a preseason game there but NBA Commissioner Adam Silver appeared to back the GM on Oct. 8, two days after the league issued a flat statement that did not back Morey.

“I recognize our initial statement left people angered, confused, or unclear on who we are or what the NBA stands for. Let me be more clear,” Silver said.

He said the NBA has a good relationship with the Chinese people and recognizes the United States and China have different political systems and beliefs.

“Values of equality, respect, and freedom of expression have long defined the NBA—and will continue to do so,” he said. “As an American-based basketball league operating globally, among our greatest contributions are these values of the game.”

Silver added later: “It is inevitable that people around the world—including from America and China—will have different viewpoints over different issues. It is not the role of the NBA to adjudicate those differences. However, the NBA will not put itself in a position of regulating what players, employees, and team owners say or will not say on these issues. We simply could not operate that way.”

Adam Silver has released statement on league’s relationship status with China, reading in part: “The NBA will not put itself in a position of regulating what players, employees and team owners say or will not say on these issues. We simply could not operate that way.” pic.twitter.com/A43BOAdG57

The Los Angeles Lakers and Brooklyn Nets are in China, slated to play a game on Oct. 10.

The NBA postponed the teams’ media sessions in Shanghai ahead of the game.

“Given the fluidity of the situation, today’s media availability has been postponed,” the league said in a statement.

An NBA Cares event that was going to benefit the Special Olympics was also canceled, along with a fan night celebration, reported The Associated Press.

City workers were reportedly going around tearing down advertisements for the game.

A number of companies in China, which is ruled by the Chinese Communist Party, have suspended ties with the NBA, including Li-Ning and Vivo.